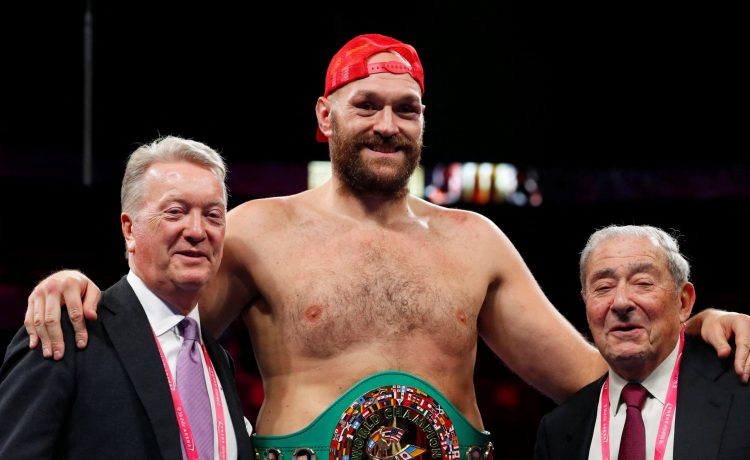 Dean Whyte claims Dillian Whyte has only received four tickets from Queensbury Promotions for the Body Snatcher’s world title clash with Tyson Fury at Wembley Stadium, as he hit out at the Gyspy King’s team for “treating us like s***.” The allegations have come to light just 11 days out from the mouthwatering all-British dust-up as the pair edge closer towards the conclusion of their training camps.

Fury has stayed at his own boxing gym in Morecambe working with trainer SugarHill Steward while Whyte has been working away in silence in Vilamoura, Portugal.

The challenger has opted to remain silent – despite being contractually obliged to promote the fight on his social media channels – ever since signing on the dotted line just hours before the deadline.

Whyte is said to feel aggrieved with his 20 per cent share of the record-breaking £31million purse and failed to show at the official fight press conference in March.

Now his brother Dean has moved to defend the Body Snatcher, claiming there has been a total disregard for Whyte as the B-side – something that he believes goes as far as ticket sales.

“There’s been a lack of respect and a lack of humility [from Tyson’s side]. Just because they’ve won the purse bid there’s a feeling that just because they have control they can treat us like sh*t,” Whyte told BoyleSports Boxing.

“First off we’re human beings – if they wanted the best out of Dillian, or any athlete – you treat them with courtesy and respect.

“They won the purse bids but then we have all the shenanigans; four tickets for fight night, three seats on a Ryanair plane economy for the presser, all of this caper.

“You spent 41 million on this fight. Why would you want to send one of the prize assets on an economy plane where you could catch COVID, then spread it around the press conference, and the whole show gets disbanded?”

Whyte also claims the Body Snatcher has been told he will only be able to have four members of his team backstage on fight night, when 94,000 spectators will be packed into Wembley.

You wouldn’t get that on a Matchroom show. Fury will have 100 people backstage,” Whyte added.

“There should be a level playing field, let’s be reasonable. No tickets to sell to Whyte fans, allegedly Tyson Fury has done this all on his own, apparently, there are no Dillian Whyte fans. Maybe it’s not contractual but I’ve never seen a fighter not get tickets to sell to their fans.

“I think it was Ticketmaster they allegedly sold the tickets to. A lot of resellers have bought them and they’re on StubHub.

“I understand that’s the game, but the thousands of Dillian fans that have messaged me can’t get a ticket because they’re too much.”

Express Sport has approached Queensbury Promotions for comment in response to Whyte’s allegations.

The two rivals are finally expected to come face-to-face next week at the press conference when Whyte returns to the UK for his shot at glory.

Frank Warren has already confirmed that a replacement opponent is already in place, in case Whyte fails to show…