Home » Should you keep tomatoes in the fridge or the cupboard? Fact-checked
Food 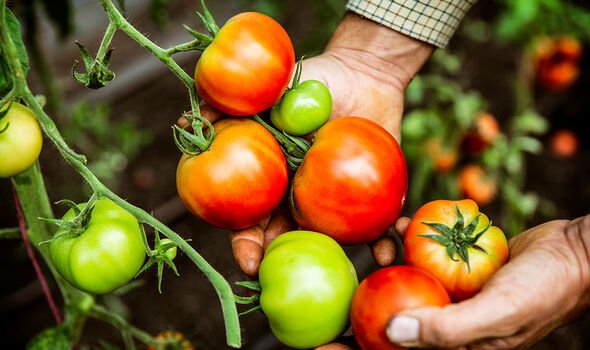 Tomatoes come into season in the summer months, with green-thumbed Britons able to sow their garden-grown crops and enjoy them in a salad. Even if you purchased your tomatoes in a supermarket, though, some debate resides over whether they should be kept in the fridge or in the cupboard.

You may have noticed that tomatoes aren’t refrigerated in the supermarket when you buy them, and there could be a good reason for this.

According to a US study conducted in 2016, chilling tomatoes for a week could dramatically reduce the levels of flavour and fragrance chemicals known as “volatiles”.

BBC Science Focus magazine explained that the study “found that chilling tomatoes for a week reduced the activity of genes that code for enzymes needed to synthesise these volatiles, which are responsible for giving tomatoes a sweeter, more complex taste.”

According to health website Mercola, the texture and colour of a tomato can also be affected by cold temperatures and “chilling injuries” caused by temperatures below 5C can leave the fruit soft and pitted on the surface.

Therefore, the evidence suggests that keeping tomatoes in the fridge can rapidly reduce how flavourful they are.

However, keeping tomatoes in the fridge will prolong their shelf life.

A later study, conducted by German scientists in 2020, looked at the taste of three tomato varieties handled under different conditions.

The tomatoes were either chilled or stored at room temperature.

Their findings disagreed with the initial research, concluding that short-term storage of ripe tomatoes in a refrigerator did not harm the flavour.

Experts point out, however, that what matters the most is how ripe your tomatoes already are at the time they are placed into a refrigerator.

If your tomatoes are not yet fully ripe, placing them in the fridge will stop them from ripening further.

Most tomatoes bought from supermarkets should already be ripe – especially if they were not already refrigerated.

Therefore, if you are unlikely to eat them within a few days, popping them in the fridge should do no harm.

However, if you have bought tomatoes that need a little extra time to ripen, or have grown your own, you may want to think twice about the fridge.

Experts from Food52 state: “You definitely shouldn’t put unripe tomatoes in the refrigerator.

“They need to stay at room temperature, ideally in a single layer out of direct sunlight.

“And most importantly for keeping them fresher longer, store them stem side down while they finish ripening.”