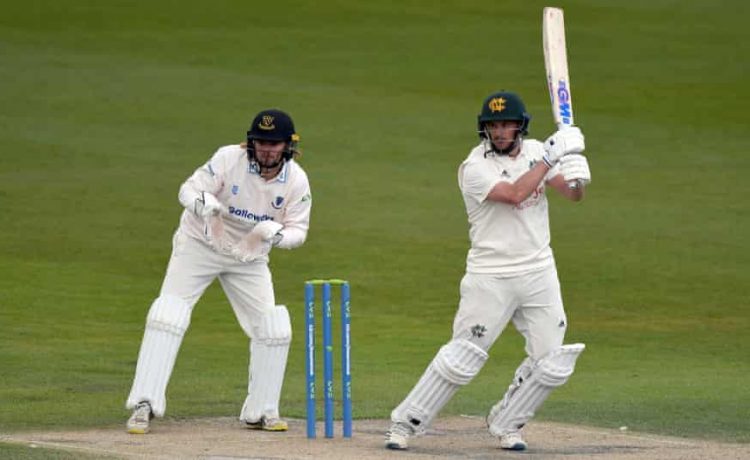 Maybe it was the sight of Rory Burns’s magnificent mane of brown hair, bouncing behind him as he trundled up to the wicket to deliver a tame dobbler against Warwickshire. Perhaps it was Sir Alastair Cook against Glamorgan, sporting an impish grin as he approached the crease at an angle, his arms fanned out and bent at the elbow before serving a ball high on humour but lacking any bite.

It could have been Michael Burgess’s 178 from No 8 at Edgbaston against Surrey in the opening round of the County Championship season. Or it was the drawn match in Derby a week later that saw Cheteshwar Pujara, Shan Masood and Tom Haines all register double tons. Then again it might have been any of the other 32 centuries scored across eight days of domestic cricket. Whatever prompted it, a counterintuitive idea spilled over the horizon and opened our eyes to its inarguable truth: batting in April in England isn’t so difficult after all.

“Growing up I took it as fact that you didn’t want to be an opening batsman in April,” says Nick Browne, who scored 107 at the top of the order for Essex on the season’s first day at Chelmsford. “I reckon most people believed that when they first came through. The numbers say otherwise, don’t they?”

Indeed they do. Since 2015, there have been more hundreds scored per game – 1.58 – than any other month in the year. Since 2002 teams have averaged 30.04 runs per wicket, a mere 0.96 runs per wicket less than the most productive month of July. Batting in the final innings is empirically less challenging in April where batters coming in from one to six averaged almost 35 – more than any other month – over the last 20 years. The avalanche of stats goes on.

Several reasons have been offered. Burgess, who also keeps wicket for Warwickshire, says that the pitches are at their best at the start of the season: “People think they’re green, which they can be, but the groundsmen have been working on them for months. They’re great. Apart from being a little slower than they would be in the summer, they’re great.”

That slowness, though, is helpful to batters. Any lateral movement extracted is more easily covered. If the edge is found the ball is less likely to carry to the slip cordon or to the wicketkeeper. Both Browne and Burgess said that they witnessed several balls landing just short of the catchers behind the stumps last week. Those that do reach the cordon need to be held by hands stiff from cold.

Both batters also claimed to be more watchful at the start of the campaign. “You don’t want to be the guy who nicks off from a booming drive in April,” Browne says.

“You do see guys play with softer hands early on,” says Tim Murtagh, Middlesex’s captain and opening bowler. “I don’t really change my approach as a result. We’re still looking to hit the top of off stump and make them play but they can be less adventurous. For me, it’s more about getting through my overs and getting some miles in the legs.”

A lack of match preparation is another variable that tilts the scales towards batters in April. “There’s no proper way to replicate those overs,” says Hampshire’s Kyle Abbott, who arrived in the UK from South Africa in 2017 believing that bowling in April would be a dream. “I thought I could just turn my arm over and take a bag of wickets. It’s not like that. It’s a long season and you have to pace yourself. You start off looking for rhythm. You don’t always have it right away.”

This may be a result of the winter work conducted on hard indoor nets or away in some sunny country. For Ben Sanderson, whose nine for 132 for Northamptonshire against Gloucestershire was the best match return of any bowler in the opening round, pre-season training can have an adverse effect on seam bowlers.

“I’ve found that I need a bit of time to rediscover that line and length that works on the county circuit,” Sanderson explains. “On harder pitches you bowl short of a length and even though you know it’s not necessarily helping you prep for the English season, you still look to hit that length. Over here you’re almost bowling half-volleys by comparison. When I came back I had to relearn some things. It’s not necessarily a problem the batsmen have.”

There is also the psychological component to batting to consider. “Everyone’s nervous and eager to hit the ground running,” Murtagh says, “but batters aren’t scarred by failures yet. Maybe in June or July they’ve had a bad run, they’re struggling for big scores, they’re overthinking their techniques or stance. The start of a season is a clean slate.”

Browne agrees. “This was the first time I started the year without worrying about my score,” he says. “I just went out there [with Cook, who scored 100 in a 220-run opening stand] and focused on each ball. I know that’s something we should always do, but I felt relaxed. Talk to me at the end of the month though. I’m not sure I’m ‘Team April’ just yet.”