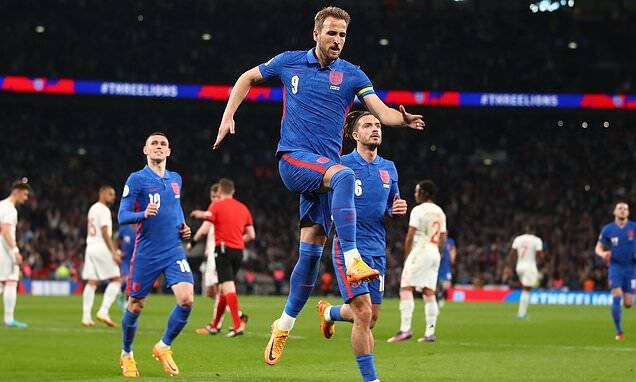 If the purpose of these international friendlies in the no man’s land between qualifying and a major tournament is to experiment and learn lessons, then mission accomplished for England and Gareth Southgate. An old system including some new faces was tested and struggled against Switzerland, before changes were needed in order to come from behind and make a winning start to this World Cup year.

One thing these games are also useful for is a bit of stat-padding. Harry Kane is now level with Sir Bobby Charlton on 49 goals for his country, with only all-time leading scorer Wayne Rooney left to catch. The England captain completed the turnaround with an emphatically converted 78th-minute penalty, awarded against Steven Zuber for handball after a lengthy VAR check.

Breel Embolo had initially put Switzerland in front, capitalising on a Benjamin White error, and deservedly so. England were rough around the edges and mostly second-best until Luke Shaw’s equaliser on the brink of half-time, after which the pattern of the game shifted with all the substitutions that come in these friendlies. To be honest, there was not much of a rhythm to the game before that either.

Then again, complaining that these games are not especially entertaining spectacles is like criticising the chimpanzee with a typewriter for not writing great literature. When it comes to producing classics that stay with you, they have about the same success rate. As the Mexican waves ran around the national stadium beneath floating paper planes, you knew this was a Wembley friendly, but that does not mean it was not useful.

The most intriguing aspect of this friendly was always likely to be the line-up Southgate selected and what pre-tournament experiments he conducted. Debutants Marc Guehi and Kyle Walker-Peters were the headline changes but Conor Gallagher was also making the first international start of his career alongside Jordan Henderson and Mason Mount in midfield, with Phil Foden further up the pitch in a front two with Harry Kane.

It was not dissimilar to the system used with success in Russia in 2018. Foden took up the Raheem Sterling role and Gallagher and Mount acted as two roving No 8s in the manner of Dele Alli and Jesse Lingard. That set-up produced England’s best performance at a World Cup in 28 years, but never truly felt like this team’s final form under Southgate and its return left something to be desired.

There was a blocked shot for Gallagher a quarter of an hour in, with the Crystal Palace midfielder checking inside and curling at goal after a clever Mount knock-down and Kane pass through the lines, but that was the best of England’s play before they went behind. Switzerland had otherwise been the busier of the two sides and just about deserved to go ahead through Embolo.

England were caught napping, not least White, a late addition to the starting line-up after John Stones was injured in the warm-up. The Arsenal defender may be in form at club level but was slow to react to Xherdan Shaqiri’s peach of a left-footed cross and lost track of Embolo, who had the requisite time and space to place his header across Pickford and out of the England goalkeeper’s reach.

Switzerland were good value for that lead and could easily have doubled it in the moments that followed. Just before Embolo’s opener, Pickford had reacted quickly to parry a Granit Xhaka strike from distance and had to be alert once more to deny Fabian Frei from a corner, tipping the centre-half’s strike against the underside of the crossbar. Despite Everton’s all-encompassing malaise, their goalkeeper continues to perform at international level.

And after that brief spell of Swiss pressure, England eventually began to apply some of their own. Walker-Peters struck the base of the post to conclude one fast break forward but turned around to see the flag raised, with Foden having strayed offside in the build-up. It appeared as though Southgate’s side would go into the break behind but as time was added on at the end of the first half, they drew level.

It said everything about their fluency in possession up to that point that the equaliser came from a rather aimless Henderson punt into the corner but this group of players are nothing if not hard-working, and some tenacious pressing by Foden allowed Walker-Peters to cut out Frei’s pass deep in Swiss territory. Gallagher picked up the loose ball and failed to play in Mount but the ball ran kindly for Shaw and invited him to put his laces through it.

It was at the same end as his third-minute opener in the European Championship final, from a similar switch of play, though obviously a goal of lesser consequence. It at least gave Southgate something to work with in the dressing room and there was more purpose to England’s play at the start of the second half, with Guehi and Conor Coady almost converting a corner.

Southgate’s side looked more comfortable, too, once switching to a 4-2-3-1 on the hour mark upon a raft of substitutions, though that may have more to do with switching some of the fresher faces for veterans of last summer. The introduction of Jack Grealish received the loudest cheer of the second half up until that point and it was from his corner that England won the decisive penalty.

Zuber was a little unfortunate, certainly by the interpretation of the handball rule that we have come to expect in this country. Guehi’s header of Grealish’s corner struck him on the arm, which could be said to be in an unnatural position, but his back was turned and he knew little about it. Nevertheless, he was punished and Kane was predictably unerring from the spot. Despite all the experiments that come in these games, some things never change.