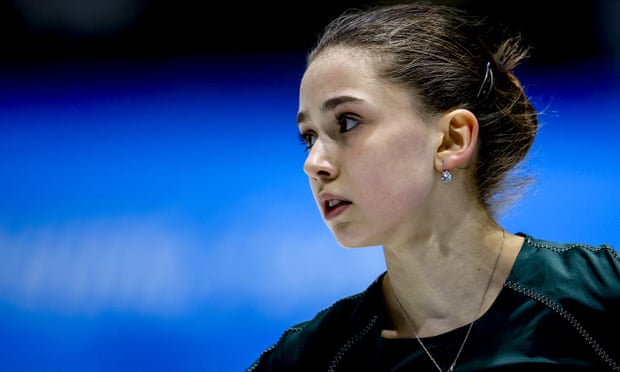 Kamila Valieva’s legal team has claimed that her positive drugs test may have come from a contaminated glass of water that contained traces of her grandfather’s heart medication.

Speaking after the daily media briefing in Beijing, International Olympic Committee member Denis Oswald confirmed the 15-year-old Russian’s explanation for her positive test for the banned angina drug trimetazidine was “contamination which happened with a product her grandfather was taking”.

The Russian newspaper Pravda said that Valieva’s lawyer Anna Kozmenko made a similar argument when the skater’s court of arbitration for sport hearing took place on Sunday.

“There can be completely different ways how it got into her body,” Kozmenko is reported to have said. “For example, grandfather drank something from a glass, saliva got in, this glass was somehow later used by an athlete. Or the drug lay down on some surface, traces remained, the drug lay down on this surface, which the athlete then drank.”

On Monday, Cas cleared Valieva to compete in the women’s skating event, which starts on Tuesday and concludes Thursday, and for which she is the heavy favourite for gold.

However if she does claim a medal the IOC has already said there will be no ceremony afterwards. Meanwhile the Russian’s doping case is ongoing and it could mean that her results – and any medals – from Beijing are stripped from her in the months ahead.

On Tuesday Valieva, who helped the Russian team win gold last week, broke her silence by saying that the trimetazidine doping scandal has left her tearful and “emotionally fatigued”.

She told Russia’s TV Channel One: “These days have been very difficult for me, emotionally. I am happy but emotionally fatigued. That is why these tears of joy and a little bit of sadness. But, of course, I am happy to take part in the Olympic Games. I will do my utmost to represent our country.

“Apparently, this is a stage I have to live through,” she added. “I hear so many good wishes. I have seen outdoor banners in Moscow. It is very pleasing, this support is very important for me in this difficult time. I thought I was alone but my closest friends and family will never abandon me.”

Cas has confirmed that Valieva testified during its lengthy hearing, which ended at about 3am on Monday. Valieva said she watched the entire hearing by video link from the Olympic Village.

“I sat there for seven hours, we had one 20-minute break, and I sat there and watched. It was very difficult, but it is apparently one of the moments, of the phases, that I have to go through,” Valieva said, adding that the entire process had taught her that adult life “can be unfair to some extent”.

Meanwhile Oswald confirmed that the IOC has still not received the reasoned decision from Cas on Valieva. He also defended the IOC’s decision not to ban Russia and its athletes completely from the Olympics after the discovery of a massive state-sponsored doping programme in 2016.

Oswald said the IOC did all that it could, and that sanctions had to be proportionate. “We took very tough measures after the 2014 Games, when the situation with doping in Russia came to light,” he added. “And 29 athletes were punished. We cannot punish clean athletes, even if they are Russians.”