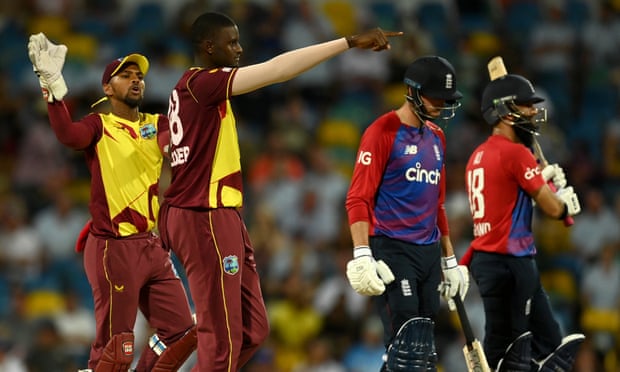 The results did not, in the end, look after themselves. England leave Barbados defeated 3-2 in the T20 series but having participated in some gripping games in front of boisterous crowds. There is no shame in providing compelling entertainment and after a lopsided opening match, when on a poor pitch England were bowled out for 103 and West Indies won with ease, this series was tense throughout.

As well as featuring two well-matched sides its success was largely down to scheduling. This was just the 14th five-game bilateral T20 series and it demonstrated how they allow narratives to emerge and intensity to build in a way that is impossible when there are fewer matches (England’s home T20 series against India and South Africa this year will be three games, as will West Indies’ in India this month).

Once minds dizzied by an unforgettable conclusion have refocused on the medium-term goal of October’s T20 World Cup, Morgan might struggle to identify the positives. England’s captain missed three matches through injury, games where he would have hoped to reestablish his batting credentials, while players whose strengths are well known demonstrated those strengths – Adil Rashid was outstanding – players with acknowledged weaknesses had those weaknesses exposed and the ones we knew little about we learned little about.

The series was not a good one for England’s batters. Including Akeal Hosein, who scored an unbeaten 44 in his only innings, West Indies had eight players whose batting average was equal to or, in most cases, significantly better than England’s best – and only 12 of their players batted. Jason Roy was England’s most consistent performer but often scored with uncharacteristic sluggishness at the start of his innings and ended with a strike rate of 130, not exactly shameful but his second-lowest in a series since 2016.

The other opener, Tom Banton, had said: “I’m not going to fit in the strongest team at the moment so I’m just trying my best to one day hopefully be able to cement my position at the top.” He did enough to suggest one day he might.

Of the squad’s other emerging talents three made their debuts in the third match but only one played more than once: Phil Salt’s 24-ball 57 was followed by two failures which, considering he was forced by circumstance into instant wild attacking, are forgivable. It would surely be worth experimenting with putting him higher up the order over the summer.

With the exception of Reece Topley, whose return to the side after an absence of nearly six years exceeded all expectations, England’s seamers struggled. In Sunday’s decider, West Indies scored 45 for four in 10 overs against spin and 122 for none against seam. The death bowling was regularly savaged but while Chris Jordan and Tymal Mills hemorrhaged runs in the final overs, Saqib Mahmood leaked runs everywhere. Other than Topley, the only English seamers with their reputations enhanced were the absent Jofra Archer and Mark Wood.

West Indies entered the series at the lowest of ebbs, humbled in their defence of the World T20 title last year and beaten at home by Ireland in an ODI series. For all that they faced a weakened England side and beat them narrowly, they travel to India with team, and hope, refreshed.

“After losing to Ireland everyone was very, very down and deflated,” Jason Holder said. “Everybody had to do some soul-searching, and feeling the way we did really made us pull together. It’s one of the first times I’ve felt that strong togetherness in the dressing room.”

Holder beat his previous highest score with the bat, as did Hosein, Kyle Mayers, Nicholas Pooran, Rovman Powell and Romario Shepherd. Well led by Kieron Pollard, they played with intensity and ability and the results looked after themselves.