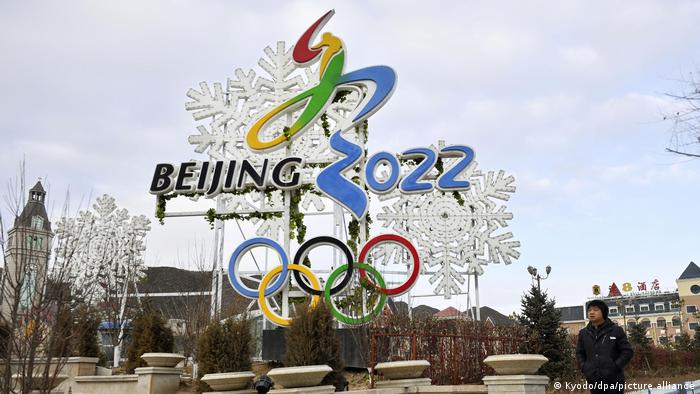 Zumretay Arkin is remembering the day she thought she might change the International Olympic Committee’s mind. It was October 2020, and human rights groups, representing Uyghur Muslims, Tibetans, and the democracy movement in Hong Kong, were granted a meeting with senior IOC figures to discuss their concerns about the Winter Olympics in Beijing.

“I explained how millions of Uyghurs are being arbitrarily detained in concentration camps,” she says. “The IOC was told survivors’ stories of rapes and torture, forced sterilisation and repression. And about families who have not heard from relatives for years.

“All of us shared personal experiences of loss and sacrifice,” adds Arkin, who fled Xinjiang, when she was 10. “And do you know what the first thing that [the then] IOC vice-president, Juan Antonio Samaranch Jr, said?”

She pauses. Shakes her head. “‘The world is a complicated place’.”

“That was the tone in which the IOC addressed us throughout the meeting,” she says. “It was extremely condescending. They were just like, ‘Yes, OK, but we’re not here to change the world’.”

Mandie McKeown, of the International Tibetan Network, was there too. “I remember an Uyghur colleague of mine telling them about her situation, and how she had many family members missing. And the IOC simply turned around and said, ‘many countries have had bad human rights – look at Guantánamo.’ It was unbelievable whataboutery.”

The IOC did offer their sympathies, according to those present. But it also stressed that it was not the United Nations, and its primary role was to bring people together through sport. McKeown felt at the time that the IOC was burying its head in the sand. She still does. “The IOC is in a massive hole,” she says. “And it is trying to get out of it by ignoring it.”

China has consistently denied human rights abuses, of course, and an informed take on the IOC’s thought gymnastics in response is offered by Michael Payne, a former senior marketing executive at the organisation who still has close ties in the Olympic movement.

“The IOC has a very fine line to walk, between standing up for its values, and ensuring that during the Olympics are not subject to a given political agenda, while also respecting its host,” he says. “Anything the IOC said supporting the human rights groups would have been immediately leaked to the media and opened up a huge can of worms.”

There are some in the IOC who privately believe it is unfair they get so much criticism while multinational groups operating in China rarely suffer opprobrium. Perhaps they have a point. But the IOC made its bed by awarding the Games to China. Now it has to lie in it. The only consolation is that it could have been even more of a public relations disaster. Last month 225 people died during protests in the Kazakhstan city of Almaty, which narrowly lost out to Beijing in 2015.

Meanwhile, a lingering question hangs uneasily in the air of the Chinese capital before Friday’s opening ceremony. Will many of those closely associated with these Games take a harder line than the IOC? It is not looking encouraging. Sponsors have been conspicuously quiet. Some broadcasters too, although the BBC is a notable exception. Perhaps the best hope is that athletes speak out. If not, these Winter Olympics will be regarded as another Great Leap Backwards for human rights.

One person determined to shake the world out of its apathy is Lhadon Tethong, an exiled Tibetan who made international headlines when she blogged on her travels through Beijing before the 2008 Olympics – until she was deported.

Tethong is the co-founder of the Tibet Action Network, which recently released a report on China’s colonial boarding schools in Tibet which makes for disturbing reading.

The network ‘conservatively estimates’ that at least 800,000 Tibetan children, 78% of them between six and 18, are separated from their families for weeks and sometimes months to live in schools intended to replace their Tibetan identity with a Chinese one.

But there is something new and worrying she is hearing, she says: that kids as young as four and five are now being sent to boarding preschool from Monday to Friday.

“The numbers are not clear just yet. But we’re talking about, in essence, babies that are being taken from their families, being made to live in these schools, to speak another language, facing political indoctrination at the absolute tenderest age in years in such a extreme environment that even after a few months, Tibetans are reporting that their children can’t engage with their families in Tibetan any more. They just want to speak Chinese or Mandarin.”

But it is not just Tibet or Xinjiang. It’s Hong Kong. And it’s the troublesome case of three-time Olympian Peng Shuai – whom Bach is meeting in person in the coming days. Before the 2008 Games in Beijing, the former IOC president Jacques Rogge suggested that hosting the Games might help China liberalise. The current incumbent, Thomas Bach, has wisely made no such promises. He would be laughed all the way back to Lausanne.

However, there is little to joke about for the athletes and journalists who have travelled to Beijing with burner phones and laptops, with warnings that they face an “Orwellian surveillance state” and potential trouble for speaking out ringing in their ears. The trust in the host nation is low.

And so, as the most controversial Olympics – certainly since Moscow 1980, and arguably Berlin 1936 – rumbles closer, those present face a stark choice: to speak out or stay silent. It is not as straightforward as it sounds given that some groups have urged those in Beijing to hold their tongues for their own safety.

“Journalists and athletes are heading into a hazardous environment,” says Minky Worden, the director of global initiatives at Human Rights Watch. “And the thing is, no one knows just how hazardous it is. All this is unprecedented in the modern Olympic era.”

It is hardly encouraging either that China is ranked 177th out of 180 countries in the Reporters Without Borders’ Press Freedom Index – ahead of only Turkmenistan, North Korea and Eritrea. However Payne, who as well as being an Olympics insider recently wrote a punchy history of the Olympics, Toon In!, maintains that the IOC will ensure that athletes and media are safe to speak out, even if that occasionally irritates the Chinese authorities.

“The IOC, over 100 years, has worked very hard to prevent the Games – and, in particular, the host from being politicised,” he says. “As an example, when the head of state opens the games it’s already scripted by the IOC as to what he can say. In Salt Lake, President Bush tried to change it. And the IOC vetoed it.”

Meanwhile, the old canard that sport and politics don’t mix will again be shattered again at Friday’s opening ceremony, which will be boycotted by bureaucrats from many western countries, including Britain and the US, which has referred to these Olympics as the “genocide games”.

Some say it is a tribute to President Bach’s negotiating skills and the power of sport to unite people that no country has opted for a full athlete boycott. Perhaps. But the IOC is not out the woods yet. Over the next three weeks it will try to perform a high-wire juggling act while being buffeted from powerful forces from all sides.

In a statement to the Guardian, the IOC confirmed it had met with the human rights groups and told them that the Olympic Games are the only event that brings the entire world together in peaceful competition.

“The IOC has neither the mandate nor the capability to change the laws or the political system of a sovereign country,” it added. “Given the diverse participation in the Olympic Games, the IOC must remain neutral on all global political issues.”

Perhaps. But here the words of Archbishop Desmond Tutu, a great friend of the Olympic movement, also come to mind. “If you are neutral in situations of injustice, you have chosen the side of the oppressor,” Tutu famously warned. “If an elephant has its foot on the tail of a mouse and you say that you are neutral, the mouse will not appreciate your neutrality.”