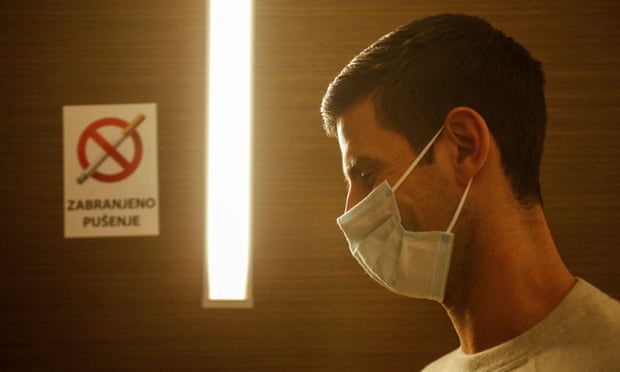 Novak Djokovic says he would rather miss out on grand slams than be vaccinated against Covid, in his first major interview since being deported from Australia earlier this year due to his vaccination status.

Djokovic told the BBC on Tuesday he was not anti-vaccination in general but believed people had the right to choose whether they were jabbed or not.

Asked if he would miss the French Open over his vaccine stance, he replied: “That is the price that I’m willing to pay.” Asked if this was also his attitude towards Wimbledon, he said: “Yes.”

“The principles of decision-making on my body are more important than any title or anything else,” Djokovic said.

“I’m trying to be in tune with my body as much as I possibly can. I understand and support fully the freedom to choose … whether you want to get vaccinated or not, and I have not spoken about this before, and I have not disclosed my medical record and my vaccination status, because I had the right to keep that private and discreet.

“But as I see there is a lot of wrong conclusions and assumptions out there. It’s important to speak up about that and justify certain things.”

Djokovic said he was never against vaccination. “I understand that, globally, everyone is trying to put a big effort into handling this virus and seeing, hopefully, an end soon to this virus,” he said.

The 34-year-old did not rule out being vaccinated for Covid in the future – telling the BBC he was keeping his “mind open”.

Djokovic acknowledged it would be difficult to compete in “most of the tournaments” on the tennis calendar due to current Covid vaccination entry rules.

“I’m part of a very global sport that is played every single week in a different location. So I understand the consequences of my decision and one of the consequences of my decision was not going to Australia, and I was prepared not to go, and I understand that not being vaccinated today, I’m unable to travel to most of the tournaments at the moment.”

Djokovic said he had “always been a great student of wellness, wellbeing, health, nutrition”.

“As an elite professional athlete, I have always carefully reviewed, assessed, everything that comes in from the supplements, food, the water that I drink, or sports drinks, anything really, that comes into my body as a fuel. Based on all the informations that I got, I decided not to take the vaccine as of today.”

Djokovic was detained when he arrived in Melbourne in early January before a legal stoush ended with his deportation on the eve of the Australian Open.

He was ultimately deported after Australia’s immigration minister, Alex Hawke, exercised his ministerial discretion to cancel the world No 1’s visa.

Hawke’s determination that Djokovic’s participation in the Australian Open “may foster anti-vaccination” sentiment and cause “civil unrest” was upheld by the full federal court after the tennis star lodged a last-ditch appeal.

At the time, Djokovic said in a statement he was “extremely disappointed” with the ruling. In the BBC interview, Djokovic rejected Hawke’s reasoning.

“The minister for immigration used his discretion to cancel my visa based on his perception that I might create some anti-vax sentiment in the country or in the city, which I completely disagree with,” he said.

Djokovic also distanced himself from the anti-vaccine movement. Asked what he would say to anti-vaccination activists who claim he supports their cause, Djokovic said: “Everyone has the right to choose to act or say whatever they feel is appropriate for them and I have never said that I’m part of that movement.”