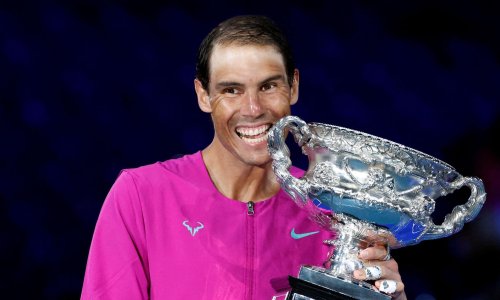 Can a thing feel entirely impossible and entirely inevitable all at once? This, perhaps, was the paradox of the most recent Greatest Comeback In The History Of Tennis: once it began you could already glimpse how it ended. We’ve all been doing this for 15 years. The muscle memory is too strong, the emotional liturgy too deeply ingrained. This is why, from the moment Rafael Nadal started to claw back his Australian Open final against Daniil Medvedev from two sets down, it never really crossed my mind that he would lose.

At the moment of victory the crowd roared and the commentator hailed the “miracle of Melbourne” and Medvedev paid tribute to an “amazing champion” and this, too, felt comforting, hypnotic, agreeably familiar. It had been another great match, probably the greatest, definitely the greatest. Nadal, with his 21st grand slam title, was now definitely the greatest, along with the other two who were also the greatest. Up in the press box, the world’s greatest sportswriters flexed their typing fingers and once again applied themselves to the pointless but highly lucrative question of legacy.

None of which is intended as a slight on the players themselves, or the level of skill required. Nadal said his career should be remembered for moments and not mathematics, but out there in the great beyond, the world was quickly proving him wrong. This was, after all, a seismic development in the “Goat debate”. A decisive move in the “Goat race”. Nadal’s victory, we were told, had pushed him to the forefront of the “Goat conversation”.

With just a modicum of distance, it’s possible to observe what a strange and diminishing state of affairs this is: the men’s half of an entire sport reduced to the level of a pub debate, a swirling and interminable noise that seems to have sucked all the oxygen and a good deal of the fun out of the room.

Smart, well-informed people now go on television and argue about head-to-head records and win percentages. Increasingly hostile online fandoms fire off memes and insults at each other as if they were Top Trumps.

At what point does this stop feeling relevant or constructive or remotely interesting and become an industrial waste of everyone’s time? This isn’t Nadal’s fault, any more than it is the fault of Roger Federer or Novak Djokovic. Rather, the problem is with men’s tennis itself, the people who cover it, the people who follow it and the people who market it: a panoply of well-meaning characters who in the past few years have begun to indulge the sport’s myth-making to a vaguely unhinged degree. In a way, it’s a form of real-time nostalgia, this fetishisation of statistics and superlatives and numbers and records (some of which, we are breathlessly informed, will never be broken!).

After all, if this were simply a fun debate then we could probably leave it there. But tennis’s consecration of its self-appointed golden era has real-world consequences, not least for the players following in its wake: the spiky Medvedev, the exciting Jannik Sinner, the brilliant Carlos Alcaraz. Attention, time, energy, media coverage, sponsorships, primetime television slots: none of this is an infinite resource. Give it to somebody and by extension you take it away from somebody else. What if a fraction of the marketing budget and column inches expended on the Big Three had instead been devoted to women’s tennis, which is quietly serving up a new era of gripping rivalries, compelling stories and new characters?

The same is true of power. For all their excellence on the court, there has been a self-perpetuating element to the Big Three, a dynasty that has been enabled and encouraged, often by the same organisations responsible for broadening opportunity.

Last week, Denis Shapovalov, the world No 12, claimed that the Big Three get favourable treatment from umpires. “Already they’re so tough to beat, but if you give them more advantages, then it just becomes that much harder,” he said, which raised a few eyebrows but is really just an extension of what has been a largely unspoken convention in the sport for years.

Schedules and court assignments are routinely built around them. Rules are relaxed, soundings taken, medical exemptions furnished. Nadal has admitted to asking that certain umpires do not take charge of his matches. At last year’s Australian Open, Nadal and Djokovic (Federer was injured) were allowed to train at a luxury Adelaide resort while most of their rivals were forced into hotel quarantine. Yes, they have also been better than everyone else at tennis. But there is something vaguely disquieting about the way the authorities have essentially smoothed the path for them.

The real question is what comes next, once the Goat conversation has finally fallen silent, once men’s tennis has finally wrung its last drops of value out of the Big Three era, once its great champions have gone and taken their banality of miracles with them. “They’ve really only marketed three players for the last decade and now it’s kind of caught up with them,” Nick Kyrgios said last week.

While Nadal’s triumph will fuel the promise of an eternal empire, that day will come, and probably sooner than we think. After all, if the Big Three have taught us anything, it is that something can feel entirely impossible and entirely inevitable all at once.