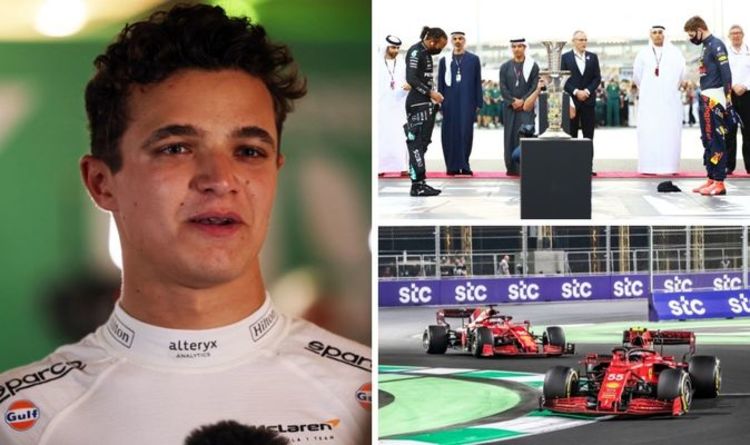 McLaren star Lando Norris has backed Ferrari to continue their return to the top of the grid in 2022 thanks to their improved power unit. Ferrari are perhaps the most famous and iconic Formula 1 team in the sport’s history, but they suffered a disappointing 2020 season.

The Maranello outfit finished sixth in the Constructors’ Championship, with their engine power – a traditional strength of the team – severely lacking.

Ferrari returned to form in 2021, snatching third place in the standings from historic rivals McLaren to be named the best of the rest behind the elite teams in Mercedes and Red Bull.

Norris, who scored the first pole position of his career at the 2021 Russian Grand Prix, finished P6 in the World Drivers’ Championship with former teammate Carlos Sainz and Ferrari teammate Charles Leclerc either side of the Brit.

Norris was just 4.5 points behind Sainz, who left McLaren to join Ferrari ahead of the 2021 campaign.

The gap between Ferrari in P3 and McLaren in P4 though was larger, with 48.5 points separating the two.

With their exciting driver line-up of Sainz and Leclerc, Norris believes Ferrari will continue to improve in 2022.

Ferrari secured five podiums in 2021 – four for Sainz and one for Leclerc – and Norris believes the Italian giants are set to pick up their first race win since four-time world champion Sebastian Vettel won the 2019 Singapore Grand Prix.

“The progress they’ve made in the latter part of the season has had nothing to do with the car,” Norris said, as quoted by Marca.

“They have only improved their power units. I don’t think they’ve ever had a terrible car.

“Even in the last few years, I don’t think they’ve had a terrible car. They just lacked on the engine side.”

Ferrari won three races in 2019, with Charles Leclerc taking the chequered flag at both Spa and Monza thanks to the straight-line speed advantage of the red car.

Norris is confident Ferrari will return to the top step of the podium in 2022 as their power unit returns to former glory.

“When the power unit was good, they won races, so I expect them to be very competitive,” Norris added.

“This year they said they haven’t invested in the development of the car and they were all focused on next season.

“They are Ferrari, I think the most successful team in F1, and they are for a reason. I expect them to fight for wins and podiums next season. If we can join that, that would be fantastic.”

F1 will return in 2022 for preseason testing on February 23 before the opening Bahrain Grand Prix on March 20.