Home » Antonio Brown: I did not quit on Buccaneers during game, I was injured
American Football 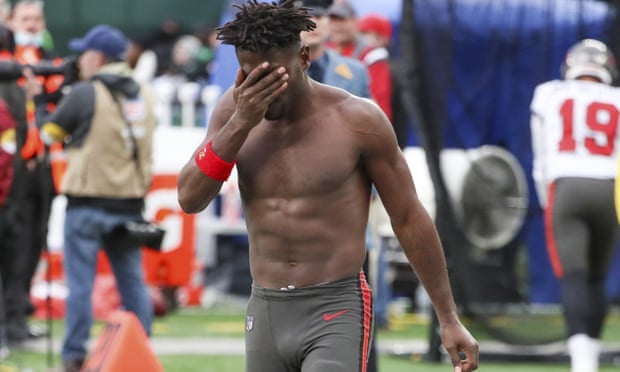 Antonio Brown says he didn’t quit on the Tampa Bay Buccaneers during the middle of a game on Sunday, but rather he was cut after refusing to play through an ankle injury that sidelined him for several weeks this season.

The oft-troubled wide receiver, who took off his jersey, shoulder pads and undershirt before walking off the sideline during Sunday’s victory over the New York Jets, said in a statement released by his attorney that he was pressured to play. He claims Bucs coach Bruce Arians then fired him when the player told the coach he was not able to re-enter the game because of his ankle.

“I walked off the field,” Brown said in the statement. “But there’s a major difference between launching from the line and taking hits, compared to jogging off the field with a rush of emotions going through your mind. I am reflecting on my reaction, but there was a trigger. The trigger was someone telling me that I’m not allowed to feel pain.”

While not specifying which ankle was hurt, Brown said in the statement that an MRI performed on Monday showed broken bone fragments, a ligament tear and cartilage loss “which are beyond painful. You can see the bone bulging from the outside.”

Arians said the day after the game that Brown did not claim he was injured when he refused to continue playing against the Jets. The coach declined to discuss specifics of the conversation on the sideline and said he had “no clue” why the receiver reacted by storming off the field, tossing some of his gear into the stands and waving to fans at MetLife Stadium.

Brown told a different story in his statement.

“Because of my commitment to the game, I relented to pressure directly from my coach to play injured,” he said. “Despite the pain, I suited up, the staff injected me with what I now know was a powerful and sometimes dangerous painkiller that the NFLPA has warned against using, and I gave it my all for the team. I played until it was clear that I could not use my ankle to safely perform my playing responsibilities.

“He then ordered me to get on the field. I said, ‘Coach, I can’t.’ He didn’t call for medical attention. Instead, he shouted at me, ‘YOU’RE DONE!’ while he ran his finger across his throat. Coach was telling me that if I didn’t play hurt, then I was done with the Bucs.”

Although Arians said after the game that Brown was no longer a part of the reigning Super Bowl champions, the 33-year-old receiver who’s caught a pass in his last 144 games remained on the roster on Wednesday.

Asked about the team not making an official transaction in regard to Brown, who did not accompany the team back to Tampa following Sunday’s game, Arians replied: “It’s a management decision on what is happening right now.”

On whether it was simply a matter of how Brown will be removed the team, not if, Arians said: “Right.”

The team did not immediately respond to a request for comment on Brown’s statement Wednesday night. The receiver alleged a coverup.

“I didn’t quit. I was cut. I didn’t walk away from my brothers. I was thrown out,” Brown’s statement read.

“Being fired on the sideline for having a painful injury was bad enough. Then came their ‘spin’. Coach denied on national television that he knew about my ankle. That’s 100% inaccurate,” the receiver added. “Not only did he know I missed several games with the injury, he and I exchanged texts days before the game where he clearly acknowledged my injury.”

Brown injured his ankle during a victory at Philadelphia in mid-October. He returned to the lineup against Carolina on 26 December, after serving a three-game suspension for misrepresenting his Covid-19 vaccination status.

Brown has a history of off-field troubles in recent years. In Wednesday’s statement he attacked the Buccaneers for implying Sunday’s incident was due to a “mental health issue” rather than an injury problem.