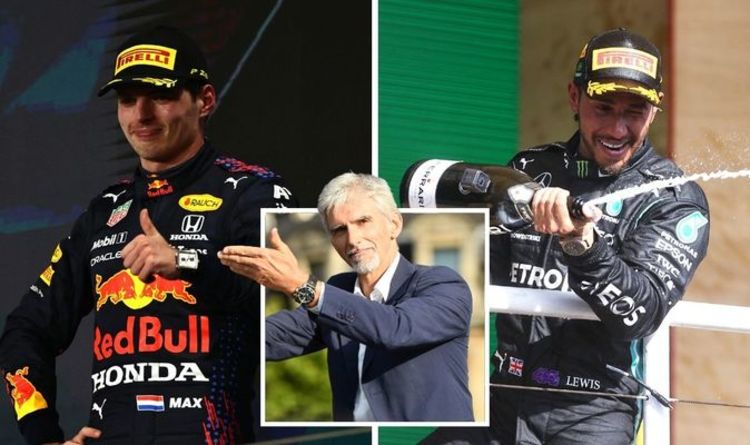 Damon Hill has urged F1 bosses to pre-empt the possibility of an “unhappy ending” to the title race by giving advanced warning of penalties to anyone who is found to deliberately cause a crash which affects the title race. Speaking to Express Sport, the 1996 world title winner called for a “clear indication” beforehand from stewards with Lewis Hamilton and Max Verstappen still in the title hunt.

Just eight points separate them with two races left in the current campaign, while the margins are even slimmer in the constructors’ championship.

The gap between Mercedes and Red Bull stands at only five points, with the Silver Arrows holding the slender advantage.

As for the drivers, it is challenger Verstappen who has the lead over Hamilton, who is hunting for a record eighth world title.

With the margins so tight and so few points left to take, a crash for either racer or their team-mates would play a huge part in deciding where the two trophies go.

But former world champion Hill said it would be a shame if such a tense and closely-fought title race was decided in such an “unsatisfactory” way, and called for officials to take steps to deter racers from doing anything unsavoury.

“For a driver to resist the temptation to be an aggressive defender is extremely high – it’s very difficult to resist that,” the 61-year-old Sky Sports F1 pundit said.

“I think the point is how can the sport take steps to prevent an unhappy ending. We’ve had enough of these championships which have been decided controversially, and I think that, for all the good work the sport does, it’s slightly undone when we have an unsatisfactory resolution.

“What can they do? We had one season where all the points were taken away from the guy who came second, which wasn’t really much of a penalty.

“I think some sort of clear indication is needed before we go into this – they may decide to impose a points penalty if we have a clash which is deemed to be unfair. That may be the only way of preventing something like that happening.”

His words come a few weeks after Mercedes chief Toto Wolff admitted the title could be decided by a Senna/Prost-style crash with both Hamilton and Verstappen going all-out to win.

The 1990 title was decided when the two legends crashed at the Japanese Grand Prix, meaning Ayrton Senna won the title and Alain Prost was left “disgusted” by the Brazilian’s actions.

Asked how much the sport would be hurt by such a conclusion this year, Hill added: “It is sad for F1 – we’ve got an obligation to be sporting.

“It is seen as being a bit naïve to expect footballers or whatever to not do the occasional foul, but it would be great if there was a way of getting it resolved.

“We want to come away with a feeling that this has been a great championship, closely fought by two opponents and the best man and the best team won.

“You don’t want anything hanging over the championship at the end.”

Hamilton and Verstappen will do battle on the track once again at this weekend’s Saudi Arabian Grand Prix, before the paddock heads to Abu Dhabi for the final round of the season.