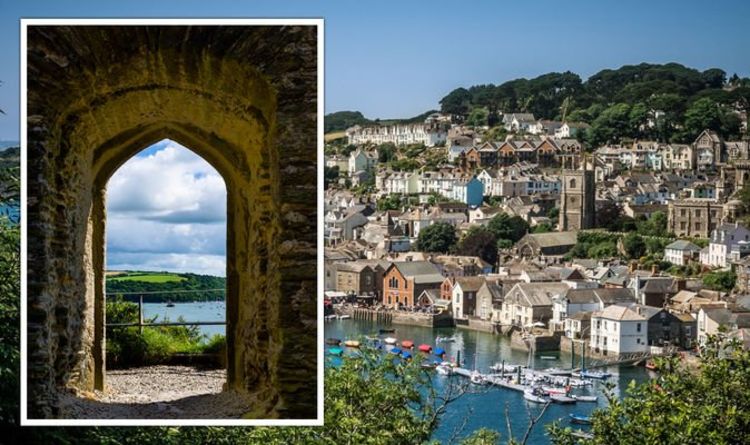 From being an important medieval town to becoming the main port from which ammunition were loaded to land on Omaha Beach on D Day, one Cornish town has a fascinating history. Britons in the Cornish Peninsula for a holiday should visit this seaside town for great nature, important history and even TV filming locations.

Fowey may have been an important town in the Middle Ages, but over the years, its significance faded in favour of bigger ports, like Plymouth.

On Tripadvisor, Steve said: “There is no disputing the fact that the old fishing village of Fowey and its estuary are beautiful.

“To stroll along the waterfront taking in the views of the estuary and then to climb and walk the narrow lanes and footpaths through the houses perched on the sides of the estuary is a wonderful thing to do.”

Martin G wrote: “One of the best towns in Cornwall to visit. Nowhere better on a sunny day. You won’t be disappointed.”

Located on the Fowey Estuary on the south coast of Cornwall, Fowey’s harbour was protected by blockhouses.

With one in Fowey and one in Polruan, across the river, chains were suspended from the 14th century blockhouses to close the harbour in time gone by.

Nowadays, the Polruan blockhouse can still be visited.

Walking around Fowey is bound to bring visitors face to face with historical buildings, such as the Old House of Foye on Fore Street, one of the oldest building in Fowey, and now a shop.

Located in an Area of Outstanding Natural Beauty, Fowey Estuary is a beautiful natural feature holidaymakers can enjoy all year round.

Going upstream, Britons may see the wildlife and birds who call this valley home.

The beauty of the area is world renown, with popular series Poldark having shot around this part of the country.

Fowey is often associated with author Daphne Du Maurier, who set many of her books around the area.

The National Trust has a walking trail, the Gribbin Head walk, which takes in some of the most beautiful and significant features of the countryside west of the town.

Britons on a holiday in Fowey may wish to take advantage of the coastal location and head to the beach.

Readymoney Cove is a small sandy beach not far from the centre of Fowey.

An old coach house, which was the home of Daphne du Maurier during the war, overlooks the cove.

Across the harbour, Polruan Quay Beach and Polruan Back Beach are also popular.

There is a ferry that takes visitors from Fowey to Polruan, as well as river cruises for Britons who want to make the most of the surrounding waters.

In Fowey, the museum is opened from April to September and is housed in one of the oldest buildings in town.

St Catherine’s Castle was built by Henry VIII in the 1530s to defend Fowey Harbour.

A short detour from the South West Coastal Path, the artillery fort is accessible to visitors and free to explore.

On Tripadvisor, Matthew said: “Hidden gem. Walk up the cliff steps beside Ready Money Beach and at the top is the castle. There are amazing views over Fowey Estuary and towards the town and the sea.”