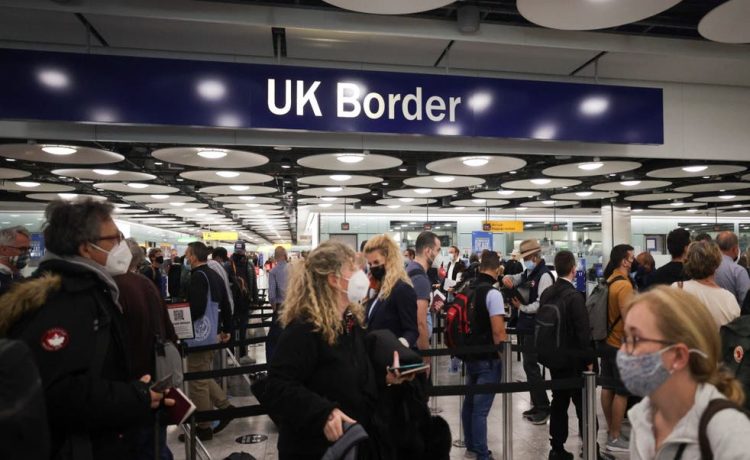 The variant, which was identified on Tuesday, initially sparked concern because it carries an “extremely high humber” of mutations. It is feared to be more transmissible, meaning the country will be placed on England’s red travel list from tomorrow noon.

As well as placing the country on the red list and banning flights from Friday, officials are reviewing a number of travel measures including whether there should be a limited reintroduction of the use of PCR tests for arrivals.

This is because their results can be tested for variants.

No cases have yet been identified in the UK but hundreds of people who have recently arrived from the country are being contacted by public health teams.

There have been nearly 100 confirmed cases in South Africa, but the country’s health minister is said to believe there are many more due to a surge of cases.

“From noon tomorrow six African countries will be added to the red list, flights will be temporarily banned, and UK travellers must quarantine.”

All flights from South Africa, Namibia, Zimbabwe, Botswana, Lesotho and Eswatini will be suspended.

Mr Javid added that scientists were “deeply concerned” about the new variant.

He said adding the six countries to the red list was about “being cautious and taking action and trying to protect, as best we can, our borders”.

Experts from the World Health Organisation (WHO) are meeting with South African officials on Friday to assess the evolving situation in the country.

Prof Christina Pagel, of University College London, said: “In my opinion the UK should get ahead of this right now.

“Adding South Africa and close neighbours to the red list seems sensible because of UK status as international travel hub, very few restrictions in UK and the worrying signs from South Africa, we must act now or risk it being too late.”

Those travelling to England from a red list country must follow certain rules, set out by the Government.

This includes taking a COVID-19 test, three days before travelling to England, as well as booking a quarantine hotel package, including two COVID-19 tests and completing a passenger locator form.

These rules apply to everyone, even if you are fully vaccinated.

These countries are the first to be added back to England’s red list since all countries were removed last month.

A No 10 spokesperson said: “We have one of the largest genomic sequencing programmes here in the UK that allows us to spot and track variants as they emerge and, as we have done throughout the pandemic, we will continue to keep an eye and keep this particular variant under investigation.”

When asked about travel restrictions in relation to this variant, the spokesperson said: “We will continue to keep the latest situation, the latest scientific evidence and data, under review, as we have done throughout the pandemic.

“We have said before if we believe we need to take action we will, but we will continue to monitor this variant and other variants in the same way that we have done throughout the pandemic.”

It is thought to have the potential to evade immunity.