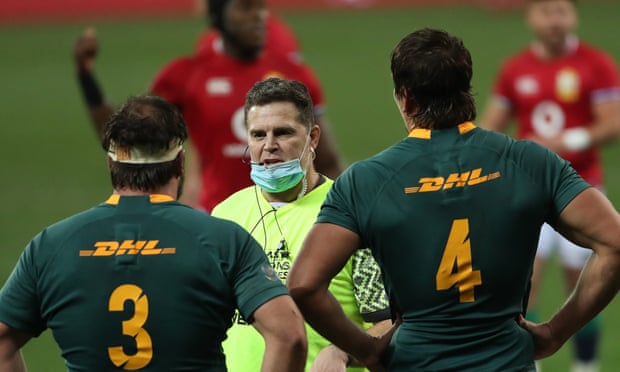 Rassie Erasmus and South Africa Rugby have issued a brief apology to Nic Berry and other match officials involved in the first British & Irish Lions Test, performing an embarrassing U-turn by also withdrawing their appeal against World Rugby’s sanctions.

Last week Erasmus was banned for two months from all rugby activities and from matchday activities for a further 10 months having been found guilty of threatening Berry, and five other charges. SA Rugby was also found guilty of failing to ensure Erasmus complied with World Rugby’s code of conduct and fined £20,000.

Both Erasmus and the union were instructed to apologise to Berry and his team of officials as part of their punishment but instead promptly issued a terse statement outlining their intention to appeal. On Thursday both parties climbed down, however, and apologised, four months after Erasmus’s extraordinary 62-minute video rant came to light.

“SA Rugby and Rassie Erasmus wish to apologise to the match officials appointed to the first Test of the Springboks’ Series against the British & Irish Lions,” read an SA Rugby statement. “We also confirm that SA Rugby and Erasmus have advised World Rugby that they withdraw their Notice of Appeal and will not lodge an appeal against the sanctions imposed.

“This has been a highly stressful and charged environment with unusual pressures placed on all concerned and we have no wish to prolong that experience for anyone. We have drawn a line under the incident and only wish to look forward. We will respect the outcomes of the hearing, allowing our national teams and rugby operations to plan with clarity for the coming months.”

In the full written judgment from the misconduct committee Berry gave powerful evidence regarding the impact of Erasmus’s “character assassination”, saying: “I have spent many years trying to build my reputation as an international referee and in the course of his video which was posted online, Mr Erasmus has caused it immeasurable damage … I feel that regardless of the outcome and any sanctions imposed, my reputation as a referee and person will forever be tarnished.”

World Rugby issued a statement in response to South Africa’s, saying the matter is now closed. “World Rugby welcomes the public apology from SA Rugby and Rassie Erasmus to the match officials involved in the first Test between South Africa and the British and Irish Lions this year and the matter is closed.”