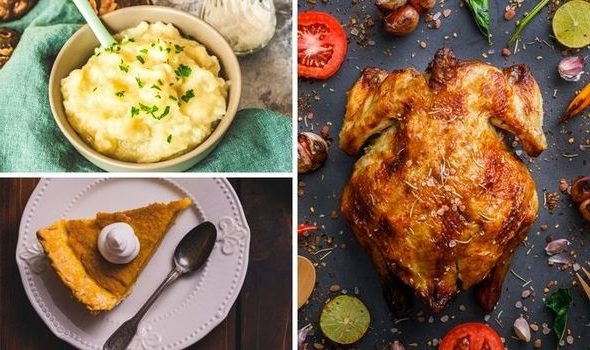 We don’t traditionally celebrate Thanksgiving in the UK unless you have American roots. However, it’s perfectly okay to join in anyway if you fancy getting involved in the holiday spirit. Thanksgiving is all about food, but you might not have time to make a full-on roast dinner if you’re starting last minute. Don’t panic, Express.co.uk reveals the three Thanksgiving staples to make in a hurry and the full recipes courtesy of BBC Good Food.

Mash potatoes take 25 minutes to prepare AND cook, so you’re on to a winner with this recipe.

Bring a large saucepan of water to the boil. Add the potatoes and boil for about 15 mins or until tender.

Transfer to a colander and drain well, then return to the pan and set over very low heat for two minutes to dry completely.

Heat the milk and butter in a small pan, then pour over the potatoes.

Remove from the heat, then mash potatoes using an electric hand whisk or potato masher.

Tip in the créme fraîche and beat with a wooden spoon until smooth and creamy. Season with pepper and a pinch of salt.

Popovers are essentially the American version of Yorkshire puddings, and they’re super quick and easy to make.

Heat the oven to 240C/220C fan/gas 9. Pour a little oil into the holes of a deep 12-hole muffin tin or 12 popover tins, making sure the oil coats the bases in a thin layer. Slide into the oven for 10 mins to heat the oil.

Whisk the flour and eggs together in a bowl with a pinch of salt until you have a smooth, thick paste.

Slowly pour in the milk, whisking continuously until you have a thin batter that’s the consistency of double cream.

Carefully remove the hot tin from the oven and quickly pour in the batter, filling the tins half full.

The batter should sizzle immediately as it hits the oil.

Bake for 10 mins, then reduce the oven to 200C/180C fan/gas 6 and bake for 10 to 15 mins more until the popovers are golden, crisp and well-risen. Serve straight away.

To make a delicious pumpkin pie for eight people, you only need just over two hours.

Place the pumpkin in a large saucepan, cover with water and bring to a boil.

Cover with a lid and simmer for 15 mins or until tender. Drain the pumpkin and let it cool.

Heat oven to 180C/160C fan/gas 4. Roll out the pastry on a lightly floured surface and use it to line a 22cm loose-bottomed tart tin.

Chill for 15 mins. Line the pastry with baking parchment and baking beans, then bake for 15 mins.

Remove the beans and paper, and cook for a further 10 mins until the base is pale golden and biscuity.

Remove from the oven and allow to cool slightly.

Increase oven to 220C/200C fan/gas 7. Push the cooled pumpkin through a sieve into a large bowl.

In a separate bowl, combine the sugar, salt, nutmeg and half the cinnamon.

Mix in the beaten eggs, melted butter and milk, then add to the pumpkin purée and stir to combine.

Continue to bake for 35 to 40 mins until the filling has just set.

Leave to cool, then remove the pie from the tin. Mix the remaining cinnamon with the icing sugar and dust over the pie. Serve chilled.