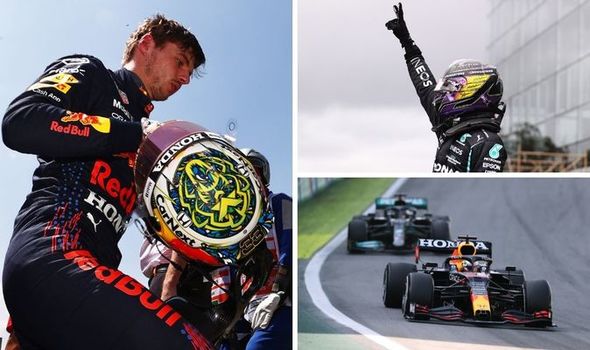 Red Bull’s Max Verstappen could face a range of penalties after Mercedes submitted a review of the decision not to penalise the world championship leader for forcing Lewis Hamilton wide at the Brazilian Grand Prix. After being awarded a five-place grid penalty, Hamilton had one of his great drives to climb from P10 and take the chequered flag at Interlagos.

The result saw the Brit close the gap to championship leader Verstappen to 14 points ahead of the final three races of the season.

On lap 48 on Sunday, the two rivals were battling for the lead with Hamilton’s Mercedes appearing to narrowly edge ahead of the Red Bull, which was on the inside.

Verstappen ran wide and the move forced both drivers off the track, with the Dutchman holding the lead for a few more laps before the seven-time world champion finally took the lead.

While Hamilton took the lead and won anyway, Mercedes boss Toto Wolff believes Verstappen should have received a penalty.

An investigation was deemed unnecessary after the FIA consulted footage provided by broadcast cameras – but Verstappen’s on-board footage shows the Dutchman clearly didn’t turn as aggressively as he could have, forcing Hamilton from the road.

Mercedes have submitted a ‘right of review’ after seeing the footage, which officials did not have during the race but emerged on Tuesday.

If accepted and the FIA opt to penalise Verstappen, the 24-year-old could be given a retrospective five-second time penalty – which would boost Valtteri Bottas to second-place with the Dutchman dropping three points.

It is more likely that Verstappen would be awarded a grid penalty ahead of the Qatar Grand Prix this weekend.

The most extreme punishment of all, used for seriously endangering the life of another driver, is to be excluded from the drivers’ world championship that year – but, needless to say, that punishment will not be handed down to Verstappen.

Red Bull are reportedly surprised their rivals have protested as they believe the on-board camera from Verstappen’s car supported the view of race director Michael Masi that it was simply hard racing.

The sporting code of governing body the FIA says: “Manoeuvres liable to hinder other drivers, such as deliberate crowding of a car beyond the edge of the track or any other abnormal change of direction, are strictly prohibited.

“Any driver who appears guilty of any of the above offences will be reported to the stewards.”

Mercedes F1 team principal Wolff said after the race that it was ‘laughable’ that Verstappen had not been penalised for the incident.

It was not the only controversial incident in Brazil, as Red Bull made several visits to the FIA claiming that Hamilton’s rear wing was illegal, granting the Mercedes a performance advantage on the straights.

This led to the investigation that ended with Hamilton being disqualified from qualifying when his wing was found not to be in compliance with the regulations – although in a different way than the one Red Bull had believed.

Verstappen admitted he thought the Mercedes wing was flexing backwards on the straights.

Red Bull are monitoring the situation but reportedly have no plans to lodge an appeal.

Formula 1 travels to the Losail Circuit for the Qatar Grand Prix on November 21.