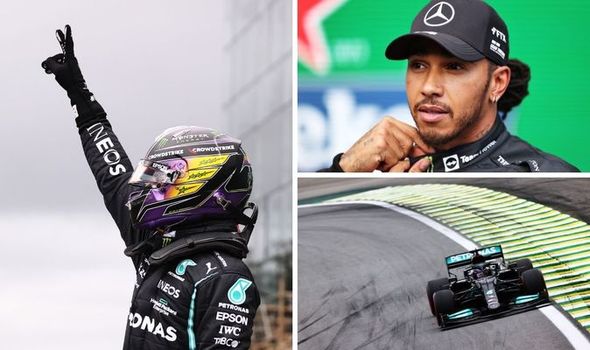 Lewis Hamilton has been called to the stewards and could be excluded from Friday’s qualification results ahead on the Brazilian Grand Prix. Max Verstappen questioned the legality of Hamilton’s drag reduction system (DRS) wing and the Dutchman has also been summoned to the stewards to report his findings.

A video surfaced of the 24-year-old touching the rear wing and DRS flap on Hamilton’s car in the pits after qualifying on Friday evening, which the Brit topped.

The DRS system is a flap in the rear wing, which opens up on straights to improve overtaking by reducing a car’s drag and increase top speed.

After the stewards had adjourned their hearing at 9:55 pm local time, a summons was issued to Verstappen and Red Bull, citing an alleged breach of Article 2.5.1 of the FIA International Sporting Code.

The section of the International Sporting Code states that ‘inside the parc ferme, only the officials assigned may enter. No operation, checking, tuning or repair is allowed unless authorised by the same officials or by the applicable regulations’.

Hamilton set the fastest time in qualifying for Saturday’s sprint race with a 1:07.934 but the DRS on his rear wing was flagged for not meeting set requirements during a post-qualifying inspection.

FIA technical delegate Jo Bauer notified the stewards of the alleged infringement on Friday evening, leading to a summons of a Mercedes team member at 7:15 pm local time.

“The uppermost rear wing element adjustable positions were checked on car number 44 for compliance with Article 3.6.3 of the 2021 Formula One Technical Regulations,” Bauer wrote.

The rear wing of Hamilton’s car was removed by Mercedes under the supervision of Bauer on Friday night and will be held by the FIA until the investigation is complete.

If his car is deemed illegal, Hamilton will be disqualified and forced to start Saturday’s sprint race from the pit lane.

A disqualification would obviously have a huge impact on the title race as the two rivals are set to line up on the front row as things stand.

With just four races to go, including Sunday’s Brazilian Grand Prix, Verstappen leads Hamilton by 19 points and the Brit is already facing a five-place grid penalty after Mercedes changed his engine ahead of this weekend.

Hamilton could therefore face both a pit-lane start for the 24-lap sprint race on Saturday as well as a five-place penalty on his finishing position to determine where he will begin Sunday’s race,

Verstappen could leave Brazil with a total haul of 29 points if the Dutchman wins the sprint race and takes the chequered flag along with a bonus point for fastest lap.

Formula 1 returns to the Interlagos in Sao Paulo for the Brazilian Grand Prix on November 14, with Red Bull star Verstappen holding a 19-point lead over Mercedes’ Hamilton.