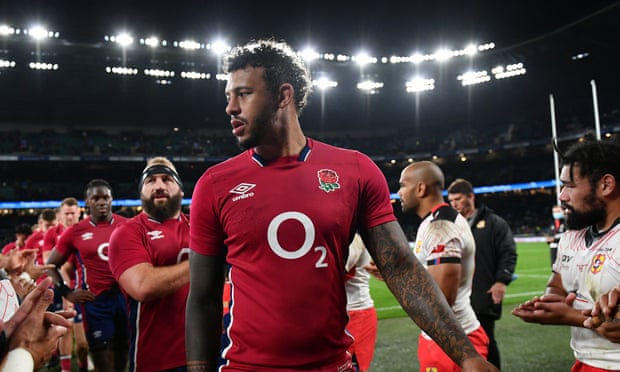 Courtney Lawes will captain England against South Africa on Saturday in the absence of the injured Owen Farrell while Joe Marchant will make a first appearance of the autumn on the right wing. Eddie Jones has also been forced into selecting a rookie front row with Bevan Rodd and Jamie Blamire making only their second England starts with Joe Marler, who is not due to come out of isolation until later on Thursday after testing positive for Covid-19, named on the bench.

Lawes was the favourite for the captaincy, having led the side in the victory over Tonga on 6 November when Farrell was also absent, but Marchant’s selection on the right wing is somewhat of a surprise. As expected, Marcus Smith continues at fly-half with Manu Tuilagi reverting to inside-centre and Henry Slade retaining the No13 jersey. Rather than opt for Adam Radwan or Max Malins on the wing, however, Jones has opted for Marchant, who normally plies his trade at centre, in an echo of last Saturday’s selections for the win over Australia.

Blamire was expected to get the nod with Jamie George missing through injury with Nic Dolly in line for a Test debut from the bench. The 23-year-old Newcastle hooker has made just three Premiership starts, however. Though he has six tries from his four England appearances to date, the world champions – who boast a formidable front row – will prove a considerable step up. South Africa significantly outgunned England at the scrum in the 2019 World Cup final and with Rodd also making only his second Test appearance, Jones is having to put his faith in inexperience. It explains why Marler, who will not be able to train with the squad until Friday, has been included among the replacements.

Elsewhere, Kyle Sinckler starts at tighthead in the two sides’ first meeting since he was knocked out in the early stages of the 2019 final while Maro Itoje and Jonny Hill continue at lock. The back row is unchanged with Sam Underhill and Tom Curry continuing at blindside. Ben Youngs is once more at scrum-half with Jonny May remaining on the left wing and the in-form Freddie Steward continuing at full-back. Joining Marler, Malins and Dolly on the bench are Will Stuart, Charlie Ewels, Sam Simmonds, Alex Dombrandt and Raffi Quirke.

Jones said: “This is our biggest game of the season and the final game of the autumn campaign and we want to finish with a bang. We’ve been really pleased with the preparation this week and how the team has continued to develop over the past month. Now we want to put on our best performance this autumn in front of a capacity 82,000 crowd at Twickenham.”