Home » Can WTA Tour thrive should its ties to China be severed over Peng Shuai?
Tennis 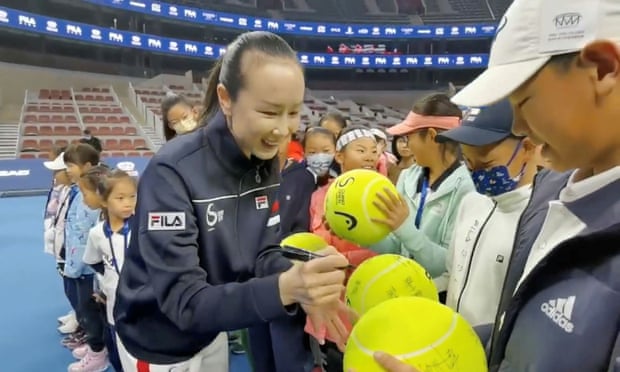 Amid global concern for tennis player Peng Shuai, Tennis Australia posted a job advertisement demonstrating the importance of China to a sport currently at odds with it. The successful applicant for the role of “Social Content Producer, China Channels” will “help tell the story of the Australian Open to our growing audience in China” through January.

The new employee will be busy, with Tennis Australia on Thursday confirming its calendar for January will include 17 tournaments in three states prior to the major in Melbourne. With the Australian Open billed as the grand slam of the Asia-Pacific, social media engagement has played a role in building the profile of the tournament in China.

The event is partnered with Chinese premium liquor brand Guojiao 1573 and Ganten, which provides bottled water for tournaments held throughout the summer swing. Both are major sponsorships. The Guojiao 1573 partnership, in particular, is considered in a similar multimillion dollar-per-year realm to that of the Australian Open’s chief sponsor Kia.

Hosting the 2021 Australian Open under conditions imposed to safeguard Victorians from Covid-19 proved incredibly expensive. This placed significant economic strain on Tennis Australia, which makes partnerships with companies like their Chinese sponsors critical from an economic perspective.

The challenge for the various bodies in the tennis family, and for the broader sporting world, is weighing their financial partnerships with human rights concerns. What happens when a fellow tennis organisation such as the WTA Tour, which is currently dealing with a testing scenario regarding Peng in China, is in peril or under duress?

While the current situation involves China, tennis and other sports have ties to other nations that also have dubious human rights reputations. It is not an isolated case. The WTA Tour, under the leadership of chairman and chief executive Steve Simon, has made clear the organisation’s stance on China during what has been an extremely challenging month for tennis.

Simon has stressed the WTA Tour will walk away from the country, and its massive investment in the sport, unless it can be satisfied about the health and wellbeing of Peng. A social media post on 2 November by the former world No 1 doubles player has raised concerns for her safety that continues to reverberate around the world.

She was not heard from for a fortnight after the post, which was swiftly deleted. While she has recently made several public appearances, they appeared choreographed and have not eased all concerns.

“We’re definitely willing to pull our business and deal with all the complications that come with it,” Simon told CNN this month.

It has been estimated that a move to break ties with China could cost the WTA Tour, which has a significant reliance on the nation, more than one billion dollars in revenue. What happens next in this particularly vexed situation is uncertain. It is one that may play out over years.

Can the WTA Tour thrive should its ties to China be severed? Will the organisation be frozen out by China even if it is ultimately satisfied about the safety of Peng? Is it possible to even be satisfied in that regard? And what happens to the other tennis players from China currently on the tour, or aspiring to be?

There are six Chinese women currently ranked inside the top 200. It is probable they harbour hopes of emulating the success of dual-grand slam singles champion Li Na or, dare it be said, winning a Wimbledon or Roland Garros doubles title as Peng did.

Shortly before the concerning situation regarding Peng arose, Simon was on the record discussing his hopes for the WTA Tour’s return to China in 2022. The WTA Tour Finals, which were held in Mexico this year due to Covid-19, are contracted to Shenzhen until 2030.

“Our support in the Asia-Pacific region, especially China, has seen a rich history of growth and talent,” Simon told the Tennis Majors website in October.

In a French tennis magazine in September, WTA president Micky Lawler lamented the impact to the women’s tour caused by the loss of tournaments in China due to Covid-19.

“Covid could not be anticipated. Please name me one person who would have said no to China?” Lawler said. “This was an opportunity for the whole of women’s sports, with unprecedented prize money records. We were proud when we announced it and still are.”

There is optimism it will be possible to succeed in new markets, some of which were tested this year, though the dividends will almost certainly be far smaller, should the situation worsen.

While the world is monitoring the situation closely, and issuing statements of support and concern for Peng, it appears business will continue with China for other organisations. The Winter Olympics in Beijing in February will proceed, though the prospect of a diplomatic boycott was raised in Australia on Thursday, as it has been in other countries.

There is no suggestion the ATP Tour will not host major tournaments in October when sporting events are allowed to occur in China post the pandemic. And the grand slam of the Asia-Pacific, otherwise known as the Australian Open, will start what is shaping as another uncertain year for tennis.