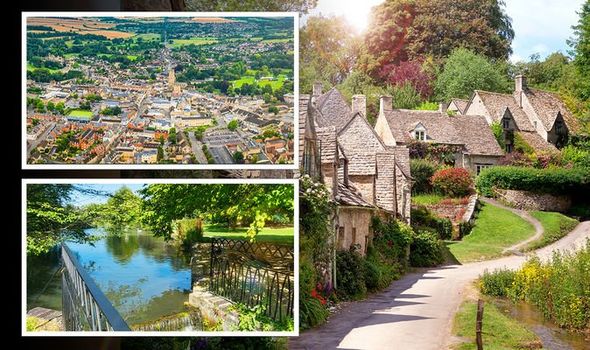 The Cotswolds is world-famous for its pretty towns and villages. International tourists fly from far and wide to have a look at the chocolate box cottages and what many may think is the quintessentially English countryside.

And now, one town has been singled out as one of the prettiest, not just in the region, but within the UK.

In the list of prettiest towns in the UK compiled by Daffodil Hotel, Cirencester comes eighth.

This is not the first time the town has made a prettiest list.

Rough Guide named the capital of the Cotswolds one of the prettiest Cotswolds villages to visit.

It was also named on the Evan Evans’s list of prettiest villages in the Cotswolds.

On Tripadvisor, RossT1984 said: “Cirencester town centre is a gem of a town to wander around.

Everyone seems to agree that Cirencester is a beautiful town, but what can Britons do once they get there?

Cirencester is known as The Capital of the Cotswolds, and was the second largest town in Roman Britain.

Nowadays, the town is home to 18,000 people, very far from the second largest city in Britain, Manchester, and its 2.7million inhabitants.

Tourists who head to Cirencester, however, are not looking for a big agglomeration.

One of the best preserved Roman amphitheatres is in Cirencester.

With a capacity of 8,000, it was built in the second century when the Romans had big plans for Britain.

Roman Britain is part of the identity of Cirencester.

Britons who wish to learn more can go to the Corinium Museum.

The history of the Cotswolds is explained and visitors can also take a deep dive into Cirencester’s Roman past.

There are markets throughout the week, with an Antiques market on Fridays, which could give Britons on a visit fantastic shopping opportunities.

The town is known for its great shopping, with plenty of independent shops to browse.

The New Brewery Arts Centre is a fantastic place to go to for arts and craft lovers.

The Arts Centre is home to a contemporary art gallery, craft shop, maker studios and a café.