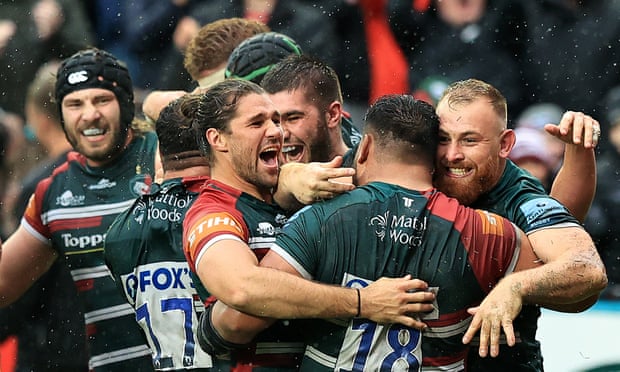 A suitably chaotic end to a dog’s dinner of game but Leicester will not care. The Tigers clinched a scarcely-deserved win with the last play of the match – a penalty try awarded to seal a one-point victory and maintain Leicester’s 100% start to the season. They were dead and buried with 10 minutes to go but George Ford’s penalty moved them within touching distance before the referee, Christophe Ridley, awarded the decisive try at the death.

It was a decision shrouded in some controversy – not for the penalty try but rather due to the fact the match was still going on at all. Saracens were 12-6 to the good and thought they had won when Guy Porter was tackled into touch. On closer inspection, however, he was adjudged to have been bundled out illegally by Aled Davies and Ford kicked the subsequent penalty to the corner, laying the platform for their grand finale.

Owen Farrell, on his first appearance of the season, was apoplectic on the side of the field, Nigel Wray, who has just relinquished control of the club after 26 years at the helm, shook his head forlornly in the stands. Pretty much everyone else in the crowd raised the roof in celebration of a third straight victory, a first over Saracens here in five attempts and the best start to a campaign in six years.

When Saracens overcome the shock, they can take solace from the fact that this was another dogged performance on their return to the Premiership. It was defensively destructive and though there were not many frills they have upwards of £30m of new investment to add the bells and whistles.

Billy Vunipola turned in the kind of unfussy performance that suggests he still has an England future – rolling his sleeves up and doing the hard yards in front of Eddie Jones – but he was ultimately deemed guilty of giving the penalty try away for collapsing the maul and he was shown a late yellow card.

“Credit to them, their fight in the 22 and how they defended was superb,” said Saracens’ director of rugby, Mark McCall, who insisted he would need to see the Porter incident again before commenting. “I thought Billy was brilliant today but we made individual mistakes which cost the team in the second half.”

Both the weather and the penalty count were great levellers but for large spells Saracens adapted better. They were able to squeeze their hosts and force them into conceding penalties, with Farrell kicking three in the first half. Leicester were at least able to take something with them into the sheds at half-time when Ridley overturned a penalty decision for dangerous play and Ford duly kicked the points.

Leicester turned to their bench early in the second half, summoning the club captain, Ellis Genge, Freddie Steward and Jack van Poortvliet but again their discipline let them down with Callum Green allowing Farrell to extend Saracens’ lead after he was pinged for not rolling away. Van Poortvliet’s introduction made a difference, however, and you sensed it was Steve Borthwick’s plan all along to finish strongly.

“Playing Saracens you’ve got to stay in the fight,” he said. “The players hung in there. Credit to them for sticking in the battle and we were fortunate to come away with the victory.”

After the cavalry arrived Leicester forced Saracens into conceding a flurry of penalties. The visitors managed to withstand the barrage but Leicester might have wondered why Ridley did not reach for his pocket.

Van Poortvliet did his best to breach the Saracens defence but while he sold Jackson Wray a dummy, Vunipola was not buying it and knocked the ball loose with a thunderous tackle.

Saracens withdrew Farell on 69 minutes – a solid if unspectacular return for the England captain – but the visitors were given a scare when Van Poortvliet thought he’d scored the opening try, only to be denied by an offside ruling.

Ford’s second penalty brought Leicester to within six points and home supporters dared to dream when Tigers were awarded another with the clock in the red. Ford kicked to the corner and Vunipola’s efforts to stop the maul were ruled illegal by Ridley, handing the Leicester victory and sparking wild celebrations.