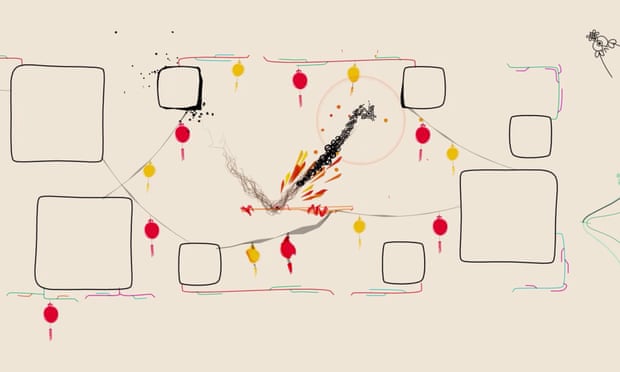 Ynglet is not the first video game to cast its player as an amoeba. Without an expansive repertoire of abilities to call upon, the single cell organism protagonist presents a certain kind of game designer with an alluring challenge. When all a player can do is swim, dash and float about a bit, puzzle and challenge must be carefully constructed from first principles. If it works, as in Ynglet, a meditative, chic jewel of a short game from Swedish designer Nicklas Nygren, there is a purity and clarity of design that none of the medium’s sprawling action epics, with their mythically capable warriors, can rival.

Contrary to appearance, this is not a game viewed top-down, as if through a microscope’s viewfinder. Rather, it’s a sideways-on biosphere, in the Super Mario style: your frondy amoeba is subject to gravity’s inexhaustible attempts to tug your character off the bottom of the screen. To navigate each of the game’s eight worlds, you must hurl yourself between bubbles of water, which catch and suspend you until you dash toward the next point of safety while seeking the exit. Ynglet is about managing momentum, about estimating arcs and trajectories while desperately trying, in common with all life forms, to resist the inexorable pull of oblivion.

The enterprise is jostled and enlivened by dandelion-puff explosions of colour and sound that lend each interaction a sense of joyous micro-ceremony. This is a good-looking game, as cleanly presented and colourful as a map of the London underground, as woozily soundtracked as a convention of vintage synth tinkerers. These aesthetic choices elevate and contextualise the game’s pleasing but undeniably straightforward interactions. Ynglet does not outstay its welcome – you’re in and out in 90 minutes or so, with some demanding, post-end-credits bonus challenges. It’s a triumphant study in how to explore and exhaust the creative possibilities within a set of tightly defined creative parameters.