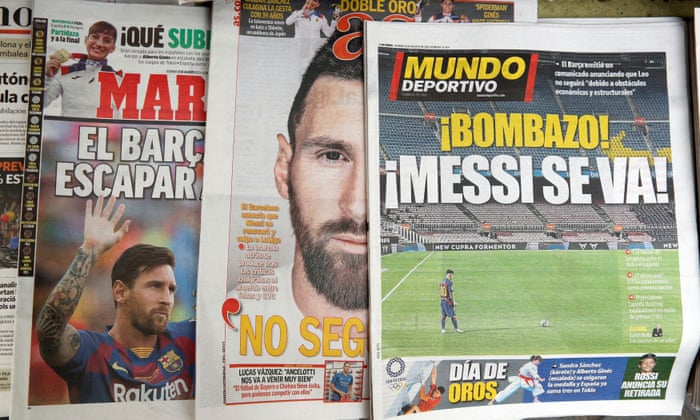 Paris St-Germain are confident of striking a deal to sign Lionel Messi after making progress in negotiations with the forward’s representatives. The club have been pushing for the Argentina international since Thursday, when Barcelona announced that he would be leaving.

Talks are focused on ensuring any deal stays within the boundaries of financial fair play and agreeing a contract length and salary. Messi had accepted a substantial pay cut to about €20m a season to stay at Barcelona but his deal was due to run for five years, ending just after he turns 39.

PSG expect discussions to continue at least until the end of Saturday. They hope the presence at the club of an Argentinian manager, Mauricio Pochettino, and Messi’s former Barcelona teammate Neymar will help to smooth a deal. Messi has spoken to Pochettino since he was told by Barcelona that his time there had to end and Neymar is working to try to convince Messi to come to Paris.

Messi turned down approaches from PSG and Manchester City some months ago, having decided he wanted to stay at the Camp Nou, but Barcelona have said financial restrictions have prevented them from renewing the contract of a player officially a free agent since the end of June.

PSG believe signing Messi – and partnering him with Neymar – would drive up their commercial revenues across the globe, and that will be factored into their financial fair play considerations.

Pochettino said at press conference on Friday that “these opportunities sometimes come up” and “our sporting director and president are working hard to improve the team”. Pep Guardiola said of a possible pursuit of Messi by City: “Right now it is not in our thoughts [to sign Messi], absolutely not.”

Barcelona’s president, Joan Laporta, explained on Friday why Messi could not continue with the club where he has spent his whole career. He said the only route available for keeping Messi would have put Barcelona at risk “for the next 50 years”.

Speaking at a news conference he said: “The club has over 100 years of history and is above any player, even the best in history, to whom we will be eternally grateful. Above players, managers and presidents, Barça will always be above them.”

Laporta said the club and Messi had both wanted to sign a new contract. “I said we’d do everything possible to keep Messi at Barça within the economic situation of club,” he said. “We reached agreement but couldn’t formalise it, because of the club’s economic situation, which means we can’t register the player due to salary limits. I don’t want to go on and on about the situation we inherited, and the awful decisions that were made in the past. We have gone from bad to worse.”

Laporta said he did not want to generate false hope when asked whether Messi could still stay at Barcelona, who have a total debt of more than €1bn.

La Liga has a salary cap, calculated based on a club’s financial health, which was reduced in November in the wake of the financial pressures caused by the pandemic, and Barcelona have been hit hard.

Laporta said the club had lined up two new deals with Messi, first a two-year deal payable over five, and then a five-year deal. But he said they were unable to get either deal done because of La Liga’s FFP rules, and that he was not willing to agree to the league’s proposed private equity investment from CVC solely to secure Messi’s future.

“In order to meet FFP, Barça had to agree to an operation, essentially remortgaging the club, which would affect us for the next 50 years in terms of TV rights, and I had to make the decision,” he said. “We cannot put the institution at greater risk.”

Despite opposition from Barcelona and Real Madrid the majority of the league’s clubs are expected to give their final approval to the CVC deal in an upcoming general assembly.

Laporta said that the coronavirus-impacted 2020-21 season’s financial losses would be double what had been expected. “We need to move on. We won’t just try to meet FFP criteria by putting the club at risk for the next 50 years.”

Laporta, asked whether he was aware of PSG’s interest, said: “Whatever he does is up to him – you’ll have to ask him. I will not answer that. I don’t know that, but it is always being said they [PSG] have options.”