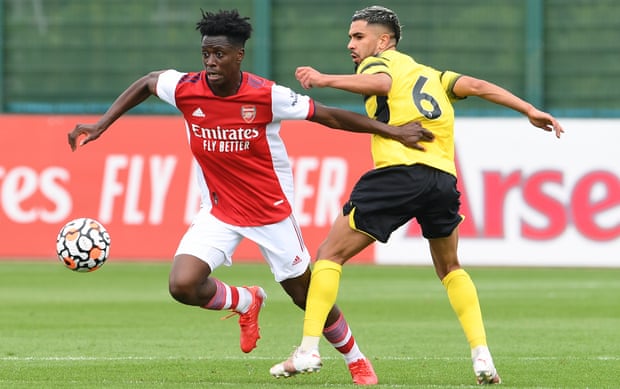 The past 18 months may have felt like a degree course in diplomacy for Mikel Arteta and he was clearly holding back when asked how he would describe a tumultuous 2020-21 season. “Extraordinarily challenging, but incredibly stimulating,” he replied, before adding a kicker. “Then I would say three dots and a big opportunity coming up.”

Arsenal’s script is always absorbing and those paying attention are nearing the end of that ellipsis. The bottom line is clear: the mitigating factors and excuses, some of them valid, must be cast aside now and things simply must improve. The onus is on Arteta to reverse a decline that has markedly worsened in the past half-decade. The minimum requirement will be clear evidence that his side can recover a chunk of ground between eighth place and the Champions League berths Arsenal have long since left behind.

Self-confident to a fault behind an often inscrutable exterior, Arteta sees reasons for optimism. The examples of Liverpool and Chelsea, both of whom roared back after a year away from European football, have been cited liberally throughout the camp; it is certainly apposite that the manager, who made no secret of his frustration at being unable to fully instil his ideas in a crammed Covid-19 fixture list, now has a clearer schedule in midweeks – although those holding the purse strings may take a different view.

Given the chasm in their finances caused by absence from the continental stage and the ongoing impact of the pandemic, early transfer business has been surprisingly brisk. Nearly £75m has been spent on the midfielder Albert Sambi Lokonga, the left-back Nuno Tavares and Ben White, all of whom are 23 or younger. The former Brighton centre-back has accounted for two-thirds of that outlay and is slated to be the David Luiz replacement who accelerates Arsenal’s possession from the back. White is more than 10 years younger than his predecessor, though, and his arrival shows an intention to invest in players whose best years lie ahead: a marked departure from some of the bloated deals offered to relative veterans in recent years. New contracts handed to Kieran Tierney and Emile Smith Rowe, two players with genuine star quality, underline the point.

It is a noble aim but Arteta still has plenty to do. Much was made of the clearout last winter when Mesut Özil, Shkodran Mustafi and Sokratis Papastathopoulos were removed from the wage bill, and there is no doubt at least one of those departures made for a happier camp. But Arsenal cannot spend unchecked and were aided significantly by a £120m loan from Barclays in May, which was used to pay off a similar sum lent by the Bank of England in January. Even if the heavily under-fire Kroenke family have decided to back Arteta, a raft of underperformers and never-quite-weres still need shifting if he is to effect his revolution.

Arteta said at the season’s end that Arsenal must undertake a “ruthless” clearout but the realities of a Covid-addled market may make that impossible, which is why wantaway old stagers such as Granit Xhaka and Héctor Bellerín could yet stick around. It piles pressure on Edu, the affable technical director whose capabilities remain under question, to ensure his manager is suitably equipped. In reality they may be hanging on until late August: it is certainly not out of the question that, should the resources be in place, Arsenal strike a late deal with Real Madrid to re-sign Martin Ødegaard or capture an heir to Pierre-Emerick Aubameyang.

Question marks loom, then, even if the preferred direction of travel is clear. Arsenal face a tough start, facing Chelsea and Manchester City before this month is over, and Arteta will have to show the big-game acumen that has been a positive in his young career if early clouds are to be averted. By September, a refreshed squad and clear calendar may see Arsenal feel awash with possibility; Arteta must pray that, on the pitch and at the negotiating table, they can seize the chance he identified in May.

There are contrasting schools of thought about Arteta’s tenure. To some, he enters this season as the deserving recipient of a cleanish slate after a hazard-strewn first 18 months; others suspect he has benefited from something of a free pass and is lucky to be in charge at all. Most opinions lean towards the former given the bloated squad he inherited – a millstone he has not yet shed – and the extraneous issues that seem to have blighted him and his team at every turn. But everybody would accept that this season he must turn around the Arsenal “boat” – his favourite metaphor – and that regression will not be tolerated. Arteta is dedicated, detailed and meticulous; one of the biggest questions is whether he can relax the hold over his players and allow them to express themselves more than they did for long periods of 2020-21.

Thomas Partey’s first eight months at Arsenal were underwhelming relative to expectation, although injuries explained that to a large extent. It did not help that he walked into such a spluttery team but, at his best, he showed he could control a Premier League midfield through a blend of quick vertical passing, physicality and canny positioning. His pre-season showings have suggested he is up to speed this time around and, if the high-profile signing from Atlético Madrid clicks consistently, it could be worth at least a couple of positions in the table.

The end of 2020-21 could not have come quickly enough for the Kroenke family, whose complicity in the failed Super League breakaway brought to the surface a decade of grievances surrounding Arsenal’s decline. When Everton won at the Emirates Stadium in April, fans’ protests outside wafted loud and clear to pitch level. Relations may have been fractured beyond repair, but the Kroenkes rejected an opportunistic approach from the Spotify chief executive, Daniel Ek, and will hope pre-season has served as a firebreak. They have promised to back Arteta and to engage with supporters more visibly, but it will be a long way to win affection from here.

Of all the players to miss England’s final penalty against Italy, did it really have to be Bukayo Saka? The assumption in many quarters, when Gareth Southgate gave him a late call-up, was that the 19-year-old would barely feature; instead he played a crucial role and nobody who has watched him consistently embarrass senior teammates at club level was surprised. Although one felt deeply for Saka, a bright and genuinely delightful character, the consolation was his uncanny ability to take things in his stride. He will bounce back and Arsenal should feel the benefit.

Fresh chants for Saka and Emile Smith Rowe will surely be a priority given their eminence during the lockdown months. Although Dani Ceballos did little of note during his two seasons at Arsenal, the loss of his song – to the tune of La Bamba – presents a blow. If things start particularly badly then expect variations of “Get out of our club” to be aimed at the Kroenkes.

Back to the Emirates Stadium

The good Still a modern, comfortable arena with excellent transport links, even if Spurs’ new ground outstrips it. Statues of legends, a club museum and some evocative installations around the outside make it feel like a destination.

The bad In a decade and a half, Arsenal are yet to furnish their home with the historic occasions that might make recollections of the Highbury glory years slightly less misty-eyed.

The cannon – although there was more than one in the early days – has been a fixture on Arsenal’s crests since 1905. The present guise was adopted in 2002: a cleaner, less fussy take on the iteration that saw them through the second half of the 20th century, although some lament the loss of touches such as the club motto, “Victoria concordia crescit”.

“This Lokonga guy is definitely our new Vieira/Petit/Fàbregas.”
“If we don’t win the next three games Arteta has got to go.”
“Arteta is a genius, have faith in the project.”
“Spotify’s share price has just rocketed, do the right thing Stan.”

Gunnersaurus’s temporary exile last year caused outcry and even became a tool in Mesut Özil’s skirmish with his then employers. Now the lovable dinosaur is back, but with a rotating squad of costume wearers.