HomeTourismIs this Switzerland? No, I’m in the Shropshire Hills
Tourism

Is this Switzerland? No, I’m in the Shropshire Hills 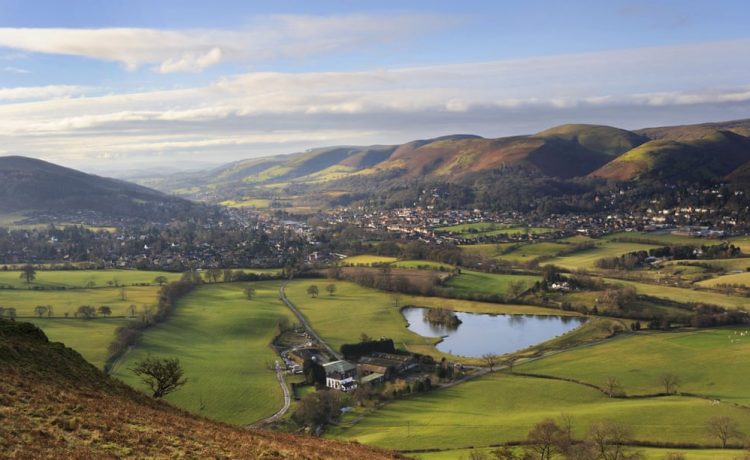 The first time I saw the Shropshire Hills it was through a misty car window during a frigid winter drive from Birmingham to Snowdonia. Scrunching up my jumper sleeve and wiping away the steam for a better look, I saw a hazy collection of dull green lumps rising starkly from their pastoral surroundings beneath a blanket of grey cloud. Though my interest had been piqued, this wasn’t the ideal way to view a landscape once described by the Victorians as Little Switzerland

This year, in the bright bloom of May, I made my way to Church Stretton, a small town in this overlooked region flanked by the Welsh border and pockmarked by quaint villages and ancient forts. Its cinematic location – surrounded by imposing hills and forested slopes – and mineral water spring turned the town into a magnet for wealthy Victorians hoping to escape the soot and grime of industrial cities.

With the coming of the railway in the mid-19th century, Church Stretton evolved into an alluring spa town without ever growing into a sizable tourist destination like Ludlow, about 15 miles south. The lofty Swiss comparisons did stick around, however, and I wanted to see how apt they were.

Walking in to town from the station, passing colourfully dressed hikers and weather-worn shop facades, I had to admit the tranquillity was seductive. A freshly painted wooden sign outside the Kings Arms pointed to its “sun-drenched beer garden”, but I had hills to walk and a pint certainly wouldn’t have helped.

I’d booked an apartment in Arden House, which is conveniently at the foot of Carding Mill valley, one of Shropshire’s most popular hiking routes. I was expecting to head into the mouth of the valley (they’re known locally as “batches”) and tackle some of its twisting trails, but Arden House co-owner Ian Price had other ideas.

“I’m just so passionate about the area and you won’t get far on foot,” he said as he drove me up the Bur Way, a treacherously steep (up to 20% in some parts) and narrow road that snakes up to the immense plateau of Long Mynd.

A vast stretch of moorland covered in thick heather and wandering sheep, Long Mynd takes its name from the Welsh mynydd, meaning mountain. It’s also a designated dark sky discovery site, with views of the Milky Way on clear nights.

We parked at a wind-whipped viewpoint almost 500 metres above sea level and I soon saw why the region was compared to Switzerland. The rooftops of Church Stretton below were engulfed in vast crisscrossing hills, with the rugged peaks of Caer Caradoc and Brown Clee Hill towering over the town beyond.

With the wind picking up, a red kite hovered above me furiously flapping its wings. “They think we’ve got sandwiches,” said Ian with a smile as we returned to his car, now surrounded by curious sheep. Driving away, he told me about the buzzards, pheasants and wild ponies that can be also be seen roaming this stark landscape.An orange windsock fluttered gently as we drove by the Midland Gliding Club towards the steep western slopes of Long Mynd and more extraordinary views. A patchwork of earthy green fields unfurled below the narrow road, with the leaden outline of central Wales’s rolling hills in the hazy distance.

Like the Bur Way, the Port Way is a hazardous stretch of road that twists and dives around the rim of the plateau, with near-sheer drops at every turn. It’s hugely popular with hikers and cyclists.

Driving back towards Church Stretton, Ian enthused about the Longmynd Hike, a gruelling 50-mile competition that takes in eight summits. Competitors can also expect to tackle almost 2,500 metres of climbs. I felt exhausted just hearing about it, but though the race was cancelled this year and last, there is usually a waiting list to enter. Ian said the last time he competed it took him about 10 hours.

Late summer and autumn are a perfect time to visit these hills: as summer fades away, the heather that covers vast swathes explodes into a flurry of bright purple, lending an almost psychedelic quality to these ancient slopes.

“Now in this valley you’ll only see locals,” said Ian as he turned the car into an impossibly slender lane just before dropping me back in town. “On bank holidays and summer weekends, you’ll get thousands over at Carding Mill, but you won’t find a soul here.”

With a quiet trail and a gentle stream flanked by hills and only birdsong for company, I felt I’d been let in on a carefully guarded local secret. A Swiss cottage certainly wouldn’t look out of place here.