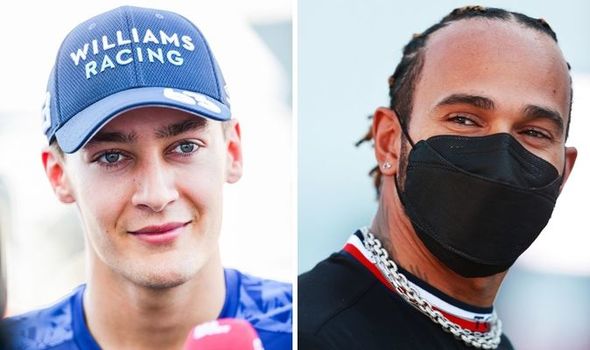 George Russell has vowed to never put his “own agenda or goals” above his team, vowing never to “hurt” his relationship with his team-mate as speculation continues that the Briton may be joining Lewis Hamilton at Mercedes.

Rumours have continued to follow Russell this season about his potential move to Mercedes, with the Williams driver a free agent come the end of the season, however, to achieve that feat would mean replacing current driver Valtteri Bottas.

The young Mercedes junior driver firmly planted a seed in boss Toto Wolff’s mind after impressing during the Sakhir Grand Prix, standing in for a Covid-stricken Hamilton in 2020.

The 23-year-old almost took a maiden with Mercedes, after sweeping past Bottas on the opening lap, however then suffered a pit stop blunder and a puncture – crossing the line P9.

Wolff has already admitted it’s a straight fight for the seat between the two, and adding to his campaign, Russell outlined why he might be a good choice for his potential new employees ahead of the Hungarian Grand Prix.

“My ambitions and goals are incredibly clear and I want to become the F1 world champion,” stated Russell. “But I would never put my own agenda or my own goals above the team no matter who my team-mate is.

“That is the same here at Williams now. I would never do anything to hurt my relationship with my team-mate and I recognise that to be able to achieve your own goals, you need the team to be operating on all cylinders.

“That team spirit and dynamic needs to be at the top of its game just to be able to achieve the team’s objectives.

“If the team achieves, then as a driver you have got a shot but I never put my own agenda or goals above the team’s.”

Russell was left in floods of tears after Williams scored its first points since 2019, celebrating a double top 10 finish.

And proving actions speak louder than words, Russell remained true to his word during the Grand Prix, asking the team to prioritise his team-mate Nicholas Latifi during the race.

“It was sort of an undercut race in Hungary,” explained Russell.

“So I knew Nicholas was in third and I knew if he came home with a P3 or a P4, those 15 or 12 points would be absolutely enough to seal P8 in the championship.

“I’ve always said it. I will put the team’s agenda above mine because ultimately I’m a team player and I want us as a team to score as many points as possible.

“Nicholas made a fantastic start. He’s making huge progress and it may not seem it on the face of it but he’s really been pushing me and just as a team we deserved to come away with those points.

“I would happily have stayed out longer to stop the guys ahead from undercutting or boxed straight away to do the undercut and let Nicholas go long if that would have meant at least one of us scored big.”