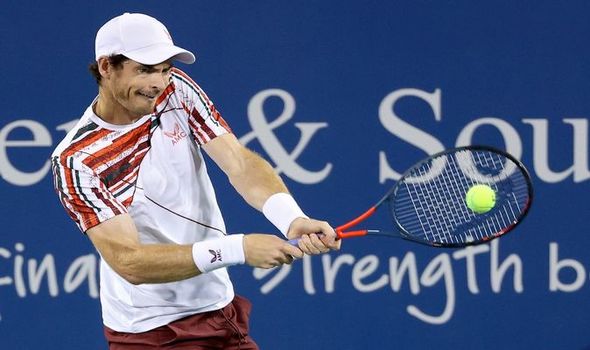 Andy Murray is feeling positive ahead of the US Open, despite a second-round loss in Cincinnati. The former world No 1 was awarded a wildcard into the Western & Southern Open, suffering defeat at the hands of ninth seed Hubert Hurkacz on Wednesday. With Murray set to play in Winston-Salem next week, he admitted his tennis is better than it was at Wimbledon, where he made it to the third round.

However, he was dealt a tough draw as he came up against recent Wimbledon semi-finalist Hurkacz, who handed Federer his first ever bagel at the All England Club last month.

The three-time Grand Slam champion didn’t play a bad match, but the Pole ultimately came out on top with a 7-6(4) 6-3 win.

With the final Major of the year looming, Murray admitted he felt positive about his progress in Cincinnati and felt he was playing better than he did at Wimbledon, despite losing a round earlier.

“I thought this week was fairly positive,” he said after the match.

“My body felt good. The American hard courts are not easy on the body and physically I was a little bit tired after some of the longer rallies, but in terms of the pain and discomfort my body was really good.”

The current world No 105 continued: “My tennis was better than at Wimbledon. It’s still not how I would like it but it’s difficult when you play against a lot of these guys now with big serves and you don’t get too many opportunities.

“That’s where the lack of matches can hurt you, because there’s not loads of rhythm out there, and you know you’re not going to get that many chances.”

Murray has accepted a wildcard into next week’s ATP 250 event in Winston-Salem ahead of the US Open.

It will be his second appearance at the event, after suffering a first round loss to Tennys Sandgren in 2019.

He’ll then set his sights on the final Grand Slam of the season as he aims to pick up more match wins, having had a stop-start season.

As well as a resurfacing surgery at the beginning of 2019 which left him out of the tour for several months, Murray has been hampered by injury niggles in recent years.

Before the tour was suspended for the pandemic last year, the 34-year-old pulled out of Indian Wells after his pelvis had been bothering him.

This season, he was forced to skip the Australian Open after testing positive for Covid, and later withdrew from the ATP 500 in Dubai after revealing his wife Kim had given birth to their fourth child.

A groin injury then forced him out of the Miami Open, and Murray opted to spend extra time preparing for the grass court season instead of returning on the clay.

“If my body doesn’t feel good, that is something that will influence my future, and if, after competing for a number of months, if my tennis is sort of going backwards, that would be another sign for me that things are not how I would like them to be. But I don’t see this week as going backwards,” he said.