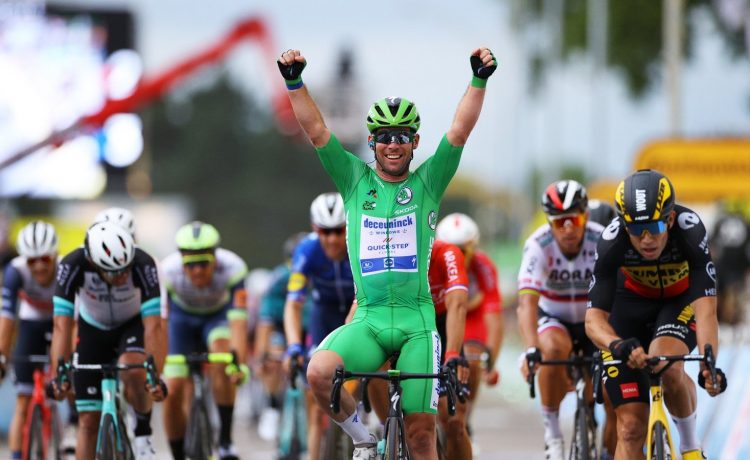 Mark Cavendish continued his fairytale return to the Tour de France in Valence by holding off Belgian national champion Wout Van Aert to take the 33rd stage win of his professional career in the race. His third stage win on this year’s Tour leaves him only one short of equalling the record of Eddy Merckx, who was overall Tour winner five times.

Cavendish, having survived a torrid weekend of Alpine racing, was at home in the Drome. Once again the lead-out he was given was exemplary with six of his Deceuninck Quick-Step teammates driving hard towards the finish to set up another irresistible sprint, which provided the cue for more jubilant celebrations.

“The reception has been incredible,” Cavendish said of his latest successs. “I’ve been absolutely touched by it. I can feel it from the French public. They have been outstanding and all the support from all over the world has been incredible. It really makes it worthwhile.

“I hope people can be inspired or get hope, when they think things are over,” he said of his comeback to the top of his sport. “If others can be inspired then that’s the greatest joy I can get out of this Tour de France.”

But Cavendish admitted that when he had started the Tour’s first stage in Brittany, he had major doubts over the wisdom of his return. “The first 20 kilometres on the first day, I thought: ‘What the fuck have you done?’” he said. “The speed that they were going, I thought: ‘What have I wished for here?’”

“But you just get into it,” he said. “Every year you forget. Every year you get to Paris and think: ‘That’s the worst thing I’ve ever done,’ and then by the Tuesday, you’re waiting for it to come around again.”

The flat finish to the transitional stage, from the Alps to the Rhône valley, was ideally suited to the rejuvenated sprinter, already winner of two stages in this year’s race, in Fougères and Châteauroux. At one point this year, his form was so deep in the doldrums that a return to the Tour seemed like folly. Now, after three wins in 10 stages, it seems inspired.

“I’ve always been professional. I do my training, I do my job. If I’m needed to go to a race, I’m prepared to go and that’s all I really did this year. It sounds quite unromantic, but I knew I was physically ready.

“I’d done the training, I could get through the mountains and I could at least be competitive. It was the first time in a long time I didn’t have any excuses to fall back on.”

Cavendish rolls his eyes when the Merckx record is mentioned but now there is no avoiding it. With potentially four sprint finishes remaining, including the most prestigious, on the Champs-Élysées in Paris, the 36-year-old has every chance of usurping the rider known as ‘The Cannibal,’ with his renewed appetite for success.

However, one thing is for sure: Cavendish will not equal Merckx’s record on Wednesday when all eyes will turn towards the double ascent of Mont Ventoux, on the 199-kilometre 11th stage from Sorgues to Malaucène. The stage over the fearsome Provençal mountain will be brutal and may prove decisive, if Tadej Pogacar of the UAE Emirates team reproduces the climbing form that reduced his rivals to mere also-rans in the Alps.

As for the past three days, further questions were directed at defending Tour champion Pogacar, after the finish in Valence, over his dominance and he was also asked if he would make his power output files available.

“Yesterday, I was asked these questions and I stated the facts. I don’t know what to do to prove my innocence,” he said of the scepticism being directed towards him. “After the crashes in the first few days, the field was not at the level it’s supposed to be. I didn’t suffer any crashes, so for me it was really good.

“Open up my files? I would love to, but then the thing is that everybody sees your files and they can use this against you in the race. But I can tell you, I push good watts – that’s why I’m the first.”