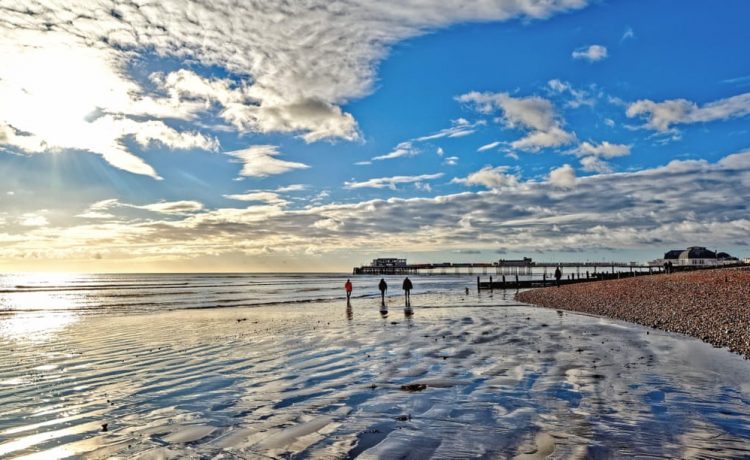 The Sussex town’s beach, pier and sights are just the start of a coastal adventure taking in Eastbourne and the South Downs

I’m eating hazelnut gelato, looking out across sun-warmed pebbles and rippling blue sea towards the renovated art-deco pier, and trying to work out why everyone I mentioned this trip to had said “Worthing!?” in Lady Bracknell-esque tones. True, the only person I’ve known who lived here was my husband’s 102-year-old aunt, but she always seemed good fun.

Arriving by train this warm morning, I got straight in the sea. Over three days, I learn to time my swims for when the wide strip of ribbed sand will be underfoot, between the shingle bank at the top of the beach and the weed-slimy ebb-tide rocks. The water feels wonderful. The pedestrianised stretch of promenade beyond the pier is transformed by the absence of traffic. There are dozens of alfresco food-and-drink options: garlicky tapas on the beach at the Coast cafe, catch of the day (such as locally caught turbot with chorizo and butter beans) in the gazebo outside CrabShack, or fresh mint and watermelon juice from the Son of a Peach snack bar.

Worthing pier was UK pier of the year in 2019 and has colourful stained-glass panels. The Pavilion at one end is hosting outdoor theatre and circus this summer. I miss the nearby free museum, which now opens only twice a week, but stays up late on Thursdays to display Jacobean embroidery, pre-Raphaelite oil paintings, flints from neolithic mines and fifth-century glass.

Opposite my hotel, there’s a blue van serving locally distilled G&Ts and the elegant Worthing Observation Wheel (£6) has views from the top across the South Downs. New outdoor beachfront exhibitions feature bird paintings, photos of wintry wild swimmers, and black-and-white shots of local lockdown heroes. Nearby are some of the town’s rentable orange Donkey Bikes (from £1.25 for 30 minutes) and there are seven level, downloadable cycle routes, heading for Brighton, Shoreham or Bramber Castle. After months at home, it feels idyllic.

Later, I visit one of Worthing’s quirkier sights: a kitschy, two-thirds replica of the Sistine chapel ceiling, painted by a local designer after his pilgrimage to Rome three decades ago. The 700 coastliner bus goes there from the seafront every 10 minutes. I’ve a PlusBus ticket, which adds a day’s unlimited bus travel in the Worthing area on to my train ticket (£2.90/£4.40 with/without railcard). On subsequent days, I buy a discovery ticket on the bus for freedom to roam (£9) or a local dayrider (£5.90 with the app. Completed in 1968, the Church of the English Martyrs (open weekdays, free), near Jupp’s Lane bus stop, looks a bit like a primary school. Inside, though, the curved ceiling has been frescoed and the stained-glass windows, incorporating glass from a local convent church, glow in the afternoon sun.

From Goring-by-Sea station round the corner (you can also get here by train), it’s a mile to Highdown Gardens (free). Not a great walk, with a quarter-mile along the pavement of the A259 and the same again up a narrow lane made steeper by the afternoon heat, but the little garden at the top is worth it. A century-old experiment in planting on the chalky downs has become a fragrant oasis of musk roses and mock orange blossom. Its grassy paths wind past ferns and irises, and through clouds of lilacs and delphiniums.

At the flint-walled Highdown hotel next door to the garden (doubles from £90 room-only), there are tables on the lavender-bordered terrace and generous starters (creamy salmon tortellini, £7.95; puff pastry, asparagus and pickled mushrooms, £7.50), which I eat with sides (from £3.50) and a pint or two of Sussex IPA (£4.40), brewed 10 miles away in the Arundel brewery. The walk back down seems much shorter.

The Highdown’s rooms were recently refurbished, but I’m staying in the seafront Travelodge (doubles from £29). It faces across busy Marine Parade towards the offshore windfarm. It’s noisy, but actually has one of the best sea views I’ve ever had. There are fancier hotels in Worthing, such as the creeper-covered Chatsworth on leafy Steyne Gardens (doubles from £88), but few cheaper ones.

Next day I ride the leisurely coastal buses to Eastbourne for top-deck views and an excellent John Nash exhibition at the Towner gallery (£11). On my last day, I hop on bus 5 to the Thomas a Becket pub near the end of the High Street in Tarring, one of Worthing’s oldest areas. The churchyard round Tarring’s wonky-spired Saint Andrew’s smells of cut grass, there are hollyhocks outside the cobbled cottages, and I stop off at the Old Bake House for a pot of leaf tea and some ginger cake (£4.60).

Back at the pub, bus 1 takes me five minutes north to May Tree Avenue on the edge of the South Downs national park. Half an hour’s gentle climb up a slightly overgrown bridleway leads to Cissbury Ring, the largest hillfort in Sussex (free). There are wild ponies grazing near the trees, downland flowers underfoot and buzzards coasting overhead.

From the far end of the fort, there’s a clear view of the distant Seven Sisters near Eastbourne. It’s another glorious evening and, with no parked car to get back to, I take a longer route back to Worthing, along a chalky track near a valley called Deep Bottom. Ahead, I can see the big wheel again, the crooked spire of Tarring church and, beyond them, the soul-balm blue of the sea. Surrounded by skylarks and wild roses, I walk down towards the station.