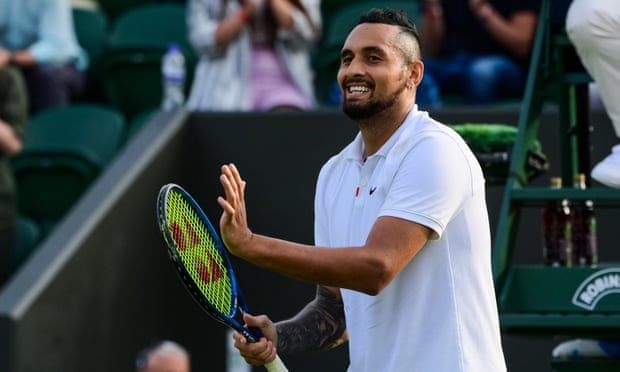 The Nick Kyrgios show is rolling on with smiles and a serving masterclass as the Australian “holidaymaker” enjoyed his second Wimbledon win in two days. Kyrgios was one of five Australians to post victory on day four of tennis in London, with Jordan Thompson registering a big win against Japan’s Kei Nishikori.

Kyrgios, who reckoned he was suffering physically from his draining first round win over Ugo Humbert on Wednesday, did not look it as he returned 24 hours later to blow away a spirited challenge from Italian Gianluca Mager 7-6 (9-7), 6-4, 6-4.

It was a victory which came with plenty of laughs and smiles – from both the player and his fan club on Court No 3 – as well as an obscenity, for which Kyrgios was instantly forgiven as he apologised profusely.

He even appeared to discover a new coach as he enjoyed great rapport with a fan sitting at courtside who offered him some sage advice. Taking crowd interaction to a new level, he had asked where everyone thought he should hit his next serve and his new mentor shouted back, “Down the middle!”.

So he did – and instantly served an ace. “Good call!” he responded, turning and pointing at his new guru whose reward at the end of the match was to have a match ball gifted to her by Kyrgios.

Even his first set four-letter outburst after he had blown a point, which saw him earn a code violation, was laughed off when he said sorry. And when disputing – fairly good-naturedly – a foot fault awarded against him, he finished off his argument with the official by booming down another ace

Everyone could see he was in the mood from the moment in the opening game when he delivered a hapless underarm serve. It got better, as he pounded down 29 aces and did not give up a single break point in one hour 51 minutes.

Mager was excellent but once he had blown a 5-2 lead in the opening set tiebreak, Kyrgios was unstoppable, particularly with his running commentary as he chuntered away about how the court was as slow as the Roland Garros clay.

“I feel like when they come to my matches now, they know how I am,” Kyrgios said. “I’m quite lighthearted. Yeah, they know it’s a bit of a show. They just want entertainment.

“I have people in the front row literally coaching me, like literally telling me, ‘That’s all right, good ball, great return, it will work next time, good depth’. I’m like, ‘Dude, what is going on out here?’

“I just feel like I don’t put as much pressure on myself anymore. When I was younger, it was hard to deal with all the criticism that everyone gave me. Like, it beat me down to a point of very bad depression.

“Like, I wasn’t even coming to Wimbledon and enjoying myself. I was not embracing this amazing event. Now I just enjoy it when I’m out there. I breathe in the fresh air.”

Thompson, who took six years to register his first Wimbledon victory, needed just one more day to land his second on Thursday. The Sydneysider stunned the former US Open finalist Nishikori 7-5, 6-4, 5-7, 6-3, joining compatriot James Duckworth and Kyrgios in the third round.

Ajla Tomljanovic, following the lead of world No 1 Ash Barty, also progressed to the last-32, leaving Thompson to declare: “The future looks bright – I don’t think there’s too much going wrong with the Aussies.”

The victory for Tomljanovic also came with a bit of help from Italy in the shape of her boyfriend Matteo Berrettini, who she credited with giving her some inspiration after being fed a bagel set by Frenchwoman Alize Cornet.

Berrettini, one of the favourites for the men’s title who had earlier won his match, turned up to give her a bit of support at courtside following that second set and she went on to record a 6-4, 0-6, 6-3 win.

Duckworth was also outstanding, keeping Querry on his toes with plenty of well-placed slice and drop shots and breaking his huge delivery five times. He will next play Lorenzo Sonego, the man who Alex de Minaur beat in the Eastbourne final, while Thompson will fancy his chances against world No 79 Ilya Ivashka.

Meanwhile, qualifier Marc Polmans’ Wimbledon run came to an end in his fifth match, going down to rising Chilean Cristian Garin. And compatriot Alex Bolt fell to local hope Cameron Norrie 6-3, 6-1, 6-2, the second time he has lost to a Briton on the famed No 1 Court after defeat by Kyle Edmund three years ago. 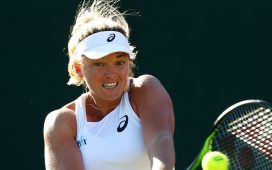