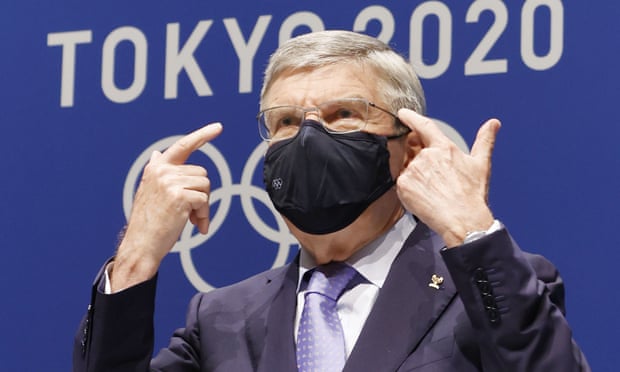 The president of the International Olympic Committee, Thomas Bach, has urged the Japanese public to welcome the Olympics when it starts on 23 July and insisted they will be “safe and secure” despite a positive Covid test at the athletes’ village.

While acknowledging the widespread scepticism in Japan, Bach said that more than 15,000 people had arrived for the Olympics, with 15 testing positive. He also said the Games would be the most restrictive sporting event in the world, thus limiting the possibility of widespread infections.

Toshiro Muto, the chief executive of the Tokyo Olympic organising committee, confirmed on Saturday that a visitor from abroad who is involved in organising the Games had tested positive. He would not reveal the person’s nationality, citing privacy concerns, but said they had been placed in a 14-day quarantine.

The case is a concern to organisers and the IOC, which had promised the village would be the “safest place” in Tokyo, but Bach said it was important to look at the wider picture. At the first IOC press conference of these Games, he said the rate of positive tests was “very low at just 0.1%”.

“It goes without saying that all the people were immediately isolated and they do not [present] any risk to the Japanese people,” he added.

Japan’s public has been lukewarm about the Games after a resurgence in new coronavirus infections and worries that an influx of foreign visitors may help turn it into a super-spreader event, which in turn could put further strain on the country’s already stretched medical system.

But Bach said: “We are very well aware of the scepticism in Japan. My appeal to the Japanese people is to welcome these athletes who are here for their competition of their lives and to acknowledge that is not for any price.

“They have the same interest as the Japanese people in ensuring these Games are safe and secure. And for this they accept and even welcome measures that make these Olympics the most restricted sports event not only in Japan but in the entire world.

“What will make the Games so historic is the demonstration that they can happen in a safe and secure way, even under the circumstances of this pandemic.”

At least five athletes have tested positive for Covid-19 since arriving in Japan for the Games, while the Refugee Olympic Team was forced to delay travelling to Tokyo after one of its delegation also returned a positive test.

However, Bach stressed the chances of Covid significantly affecting the Games was small. “None of the sports events in the world has such strict protocols for anti-Covid like these Olympic Games,” he said. “The Japanese hopefully will also gain confidence in the very rigorous testing and very rigorous immediate action.”

That message was reinforced by the Tokyo 2020 president, Seiko Hashimoto. When asked if she was worried about the Delta variant of Covid spreading, she said: “We are doing everything we can to make sure it is Covid secure.” Yet she admitted some athletes who have not yet travelled to Tokyo “are probably very worried” about the situation.

As more athletes moved into the athletes’ village, South Korea’s team were told to remove banners hung on balconies after upsetting officials from a far-right Japanese party. According to the South Korean news agency Yonhap, the message on the banners said “I still have support from 50 million Korean people” – a reference to comments made by Admiral Yi Sun-sin before defeating the Japanese navy in 1597, despite being outnumbered.

A protest was also staged outside the athletes’ village on Friday, with members of the National Party of Japan holding the rising sun flag, formerly used by the Imperial Japanese Army.

When Bach was asked whether he supported the New Zealand weightlifter Laurel Hubbard becoming the first trans women to compete at the Olympics, he dodged the question and said: “The rules are in place and the rules have to be applied. You cannot change the rules during an ongoing qualification system. This is what all the athletes of the world are relying on.”