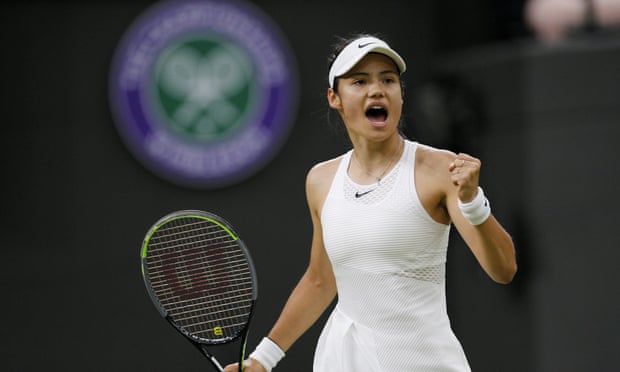 Shortly after Coco Gauff returned to Centre Court on Thursday, for her first match there since her run to the fourth round of Wimbledon as a 15-year-old two years ago, she was asked in her press conference how different the experience felt now. Gauff shrugged. She didn’t really know. “I think the biggest thing is I don’t really remember much from my Centre Court experience in 2019,” she said. “I don’t know, I felt like it was all a blur.”

In all her amnesia, Gauff inadvertently touched on one of the key qualities of professional tennis – success requires short-term memory. One result, no matter how transformative it feels at the moment, is just one result. Gauff has competed in 25 tour-level events since then and each of them has been as important in her development. Having entered her first Wimbledon with a wildcard into the qualifying event, she returned as the 20th seed.

This year, it was Emma Raducanu’s turn to mark herself as the first-week breakthrough story of the tournament. Even by the standards of most 18-year-olds who compete at this level, it is difficult to overstate Raducanu’s inexperience in senior competition and how rare it is for someone with such a sparse CV to embark on a run into the second week of a major tournament.

Raducanu has played 22 tournaments in her young career and the most she has played in a single season was her nine competitions in 2019, only four of which were outside Britain. During her interview with the BBC on Tuesday, she said that the biggest crowd she had ever competed in front of was about one hundred.

However she thrived during her first week, beating the first two top-100 opponents, 2019 French Open finalist Marketa Vondrousova and Sorana Cirstea, she had ever played. Even in the fourth round against Ajla Tomljanovic, after both players started the match hindered by their nerves, the energy and desire she demonstrated on No 1 Court was notable.

What has followed, the breathing problems she suffered during the match and the way that the most intense competitive week of her life impacted upon her, is rather logical. “I think it was a combination of everything that had gone on behind the scenes in the last week and a culmination of the excitement and the buzz,” Raducanu told the BBC.

Karolina Pliskova, the former world No 1, underlined how differently players deal with these experiences at a young age. “I don’t really know what happened,” she said. “But … 18, it’s tough to say. I think everybody is also different. Me being 18, I was still a kid.

“I think some of these girls, they are quite old enough to deal with that. I guess she also came a bit from nowhere. Some of these girls, let’s say Coco Gauff, she’s a bit ready for all of this. That helps if you’re raised like a star. I think that’s a bit different.”

This year’s Wimbledon is just one event of many to come. Raducanu will likely have the opportunity to play this tournament many more times and, should her progress continue, there are copious opportunities to finish it on a more positive note.

The biggest challenge to come will be getting on the road, travelling and enduring the year-long grind of professional tennis after only doing so for short periods during her junior career. Raducanu’s ranking will rise from 338 to a career high of around 175, a significant leap but one that does not completely transform her current playing possibilities. She will now be able to enter major qualifying tournaments, starting with the US Open in August, and make the cut into bigger ITF tournaments.

After rising to the moment of a big tournament, the most important step will be what she does in the shadows afterwards. Since she is represented by IMG and Max Eisenbud, who also represent Maria Sharapova and numerous other prominent players, she will likely receive some wildcards in the future.

But otherwise, after making her name in the raucous surroundings of Wimbledon’s No 1 Court, Raducanu will return to competing in front of 100 people or fewer, and every tournament she plays will be as relevant to her future as the last one.