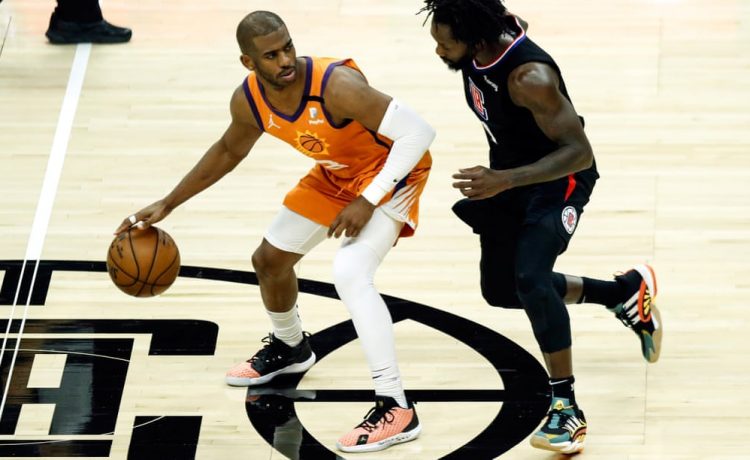 When Chris Paul collided with Phoenix Suns’ teammate Cam Johnson in Game 1 of the Western Conference quarter-finals against the title-favourite Los Angeles Lakers, going down in agony as he held his right shoulder, it looked like deja vu. Here was Paul, now on his fifth team, suffering another significant injury on the NBA’s biggest stage. Here he was, appearing to get ready to watch his seemingly indestructible friend LeBron James go on to his 11th finals appearance when Paul still hadn’t been to his first, despite being in year 16 of his NBA career.

Paul toughed it out. He re-entered the game and did all he could with a right arm that hung loosely to the side of his body like a dead plant. He struggled to dribble and only took shots from his favourite spot on the right elbow, which he still managed to slingshot in. He played that way most of the series, using his basketball smarts and slick decision-making to overwhelm the Lakers’ defense, helping the Suns win the series, 4-2.

The Suns swept the next series against the Denver Nuggets with Paul’s shoulder slowly recovering each game. Paul finished the first two rounds of the playoffs with 87 assists and just 14 turnovers, living up to his long-held nickname: the Point God.

Then as the Suns got set for the Western Conference finals against his old team – the one he played for for six seasons – the Los Angeles Clippers, Paul was again sidelined. This time, Paul contracted Covid-19 despite being fully vaccinated, forcing him to quarantine and miss the first two games of the series. Fortunately for him, the Suns won both and on Wednesday night, thanks to a 41-point game from Paul, they sealed their first NBA finals appearance since 1993.

In many ways, Paul and the Suns are lucky to be here. Lakers star Anthony Davis injured his groin in Game 4 of their first-round series and was unable to recover, while James dealt with the lingering effects of a high ankle sprain that he suffered earlier in the season. The Nuggets, meanwhile, were without star guard Jamal Murray, who tore his ACL earlier in the season. But luck plays a factor in every NBA postseason, and nobody knows that better than Paul.

Paul entered the league in 2005 when he was selected No 4 overall by the New Orleans Hornets. He made his first playoff appearance in 2008, when he was eliminated by the San Antonio Spurs in the Western Conference semi-finals. He was eliminated in the first-round in 2009 and in 2011. Then, after a trade that would have sent Paul to the Lakers – where he would have been paired with Kobe Bryant and had a chance to win multiple championships – was vetoed by commissioner David Stern, Paul was instead dealt to the historically inept Clippers. Paul brought the Clippers to the playoffs in his first season there in 2012, their first postseason since 2006.

The Lob City era Clippers, as they were known due to Paul’s flashy ability to hook up with big men Blake Griffin and DeAndre Jordan through air-born passes – and who had great hype and potential after trading for Paul and selecting Griffin No 1 overall in 2009 – never made it past the second-round of the playoffs. There were a lot of reasons for that, but chief among them was that the team’s best player, Paul, always seemed to get injured at exactly the wrong times.

In 2015, Paul injured his hamstring in a Game 7 win over the defending champion San Antonio Spurs in the first round, and he struggled to play through it in a heartbreaking seven-game loss to the Houston Rockets in round two, as his team blew a 3-1 lead in the series and allowed a wild 19-point comeback in Game 6. In 2016, Paul broke his hand in a first-round series against the Portland Trail Blazers, and the team duly lost in six games.

Then, after being traded to the Rockets in 2017, pairing up with another superstar in James Harden and breezing to 65 regular season wins and past the first two rounds of the playoffs, Paul reached the first Western Conference final of his career against the defending champion Golden State Warriors. With the series tied 2-2, Paul injured his hamstring in the dying seconds of Game 5 and the Rockets went on to lose in Game 7. With an inferior Cleveland Cavaliers team waiting in the finals, it was Paul’s best chance to win an NBA championship – at least until now.

On one hand, injuries are par for the course for physical 6ft point guards like Paul, who battle with much larger men all season and hit the ground like it’s their day job. On the other, Paul’s injuries have always seemed to come at the unluckiest times possible, especially as he has usually been healthy during the regular season.

If not for another hamstring strain, those Rockets might have gone all the way, and we might look at Paul’s career very differently. Right now, however, he’s seen as one of the best players to not win a championship – one who, despite usually being the smallest guy on the floor, controls the game and dictates the pace better than almost anyone in the history of the game. He’s known as one of the greatest competitors, playmakers, and mid-range scorers of his generation despite not having elite athleticism or speed (at least anymore). He’s also someone who gives back to his community and is the president of the Players Association, leading the NBA’s fight against social injustice. In a lot of ways, Paul’s career makes him more human, because fans can relate to that feeling of helplessness that comes with ill-timed injuries or Covid.

Still, that only goes so far with NBA fans. For many, it doesn’t matter that Paul ranks fifth all-time in assists (10,275), 51st in points (19,978), and fifth in steals (2,332). It doesn’t matter that he is one of the rare players who improves in almost every single statistical category in the playoffs compared to the regular season, including points per game (20.4) and field goal percentage (47.8). It doesn’t matter that he’s an 11-time All-Star and 10-time All-NBA. Because much like Toronto Raptors point guard Kyle Lowry, who went from being heavily criticized for failing to take his team over the edge to overwhelmingly praised after scoring 15 points in the opening quarter of a championship-clinching Game 6 win over the Warriors, Paul needs a championship to cement his legacy and improve his standing in the all-time rankings, even if that’s not entirely fair.

Now Paul has a real shot at winning his first NBA championship. He has a chance to do so in his first season with the Suns, who entered the season as outsiders to claim the first title in franchise history.

Paul didn’t ask for this career path. In fact, he might wish it was a little less complicated. But there’s no one more deserving of an NBA championship than the 36-year-old Point God from West Forsyth, North Carolina, who fought an uphill fight as the smallest person on the court since he was a kid, turning his brain into the ultimate basketball weapon. In a season like no other, Chris Paul’s time may have finally come.