‘A serious failure of security and stewarding’: Questions mount over FA’s handling of Euro 2020 final 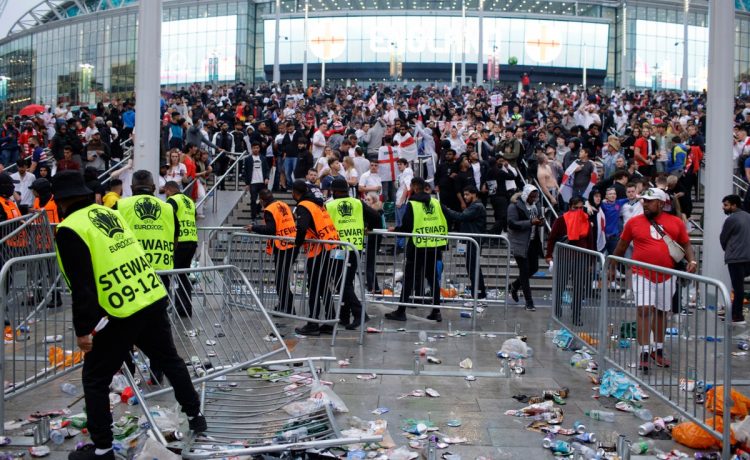 Eye-witness accounts and video evidence of ticketless fans posing as stewards to gain entry into Wembley during the Euro 2020 final has put the Football Association’s security of the showpiece under further scrutiny.

The FA’s position is that is “security and stewarding numbers for the Euro 2020 final exceeded the requirements of the match and were greater than any other previous event” at the stadium.

But several sources have told The Independent that some stewards simply did not turn up on Sunday, or entered the stadium but failed to go to their post. Many are said to have never worked a big football match before and did not have any requisite experience or qualifications.

As detailed by The Independent after the final whistle, there was a failure to carry out body, bag and Covid-test checks thoroughly, placing the safety and health of those in attendance at risk.

Now several videos and testimonies have emerged of people successfully – and quite effortlessly – blagging their way into the national stadium under the guise of stewards.

One piece of footage shows three young men en route to the venue with accreditation for the role – matched to what it looked like on the day – getting changed into England gear in one of the toilets and spending the match watching as supporters in front-row seats.

“Just like that, we finessed the system and got paid for it,” the video, which has been put to the FA for comment, brags. While its veracity has not yet been confirmed, the clips are clearly from the final and there have been correlating witness reports of fake stewards.

Graham Hiley went to the match with his disabled son Tim and his friend Joe McIndoe, both in wheelchairs. His other son Martin, acted as a carer. They were horrified by the chaos outside Gate K. Disabled fans were being floored by the ticketless hundreds surging through that entrance, with the security described as “abysmal.”

One supporter, pretending to be a steward and wearing a high-vis jacket, tried to grab Joe’s wheelchair.

“It was a very frightening experience for Joe to have his wheelchair hijacked by a complete stranger,” Hiley, who lectures sports journalism at Solent University, told The Independent. “It was also scary fighting our way through the crowds with two vulnerable people in wheelchairs while worrying about my phone being snatched as that’s how I needed to show my tickets.

“Nobody seemed to know how to activate tickets. We asked a steward at the outer perimeter and were told to ask at the gate. We did but again nobody knew how to do it. The NHS App was not looked at properly, you could have shown a Nando’s booking and be waved through.

“I don’t feel the stewards were prepared and probably paid enough to stand in the way of that mob forcing their way through. I don’t think they had any concept of what they were facing, with no protective gear, just fluorescent bibs and probably expecting to simply direct fans and welcome them.

“Most stewards I saw would be students or early twenties I guess. I have been following England as a fan and as a journalist for 41 years since the riots of Turin.

“I was at the abandoned game in Dublin so I am not a stranger to witnessing crowd trouble but this was very different – not just fighting, but the real risk of a crush. And what if someone had been carrying a bomb?

“I don’t feel the stewards were prepared and probably paid enough to stand in the way of that mob forcing their way through. I don’t think they had any concept of what they were facing, with no protective gear, just fluorescent bibs and probably expecting to simply direct fans and welcome them.”

Graham and Tim have both tested positive for Covid following the game.

Three employees from Wise Security, who provided stewards for the final, have approached The Independent to criticise the lack of preparation they received and care after a harrowing experience.

None of them are over 22. They have spoken anonymously to prevent being blacklisted for future jobs and confirmed that there had been fake stewards inside Wembley, that some accepted bribes because “the pay is a joke”, that there was no detailed plan of anything that could go wrong on the day or how to handle it, and that even after suffering both racist and physical abuse by ticketless fans, there’s “been more PR than caring about what we’ve just been through and asking if we need help.”

One of them, a young Asian male born in the south of England that was stationed in a stand that became overrun with ticketless fans, was racially abused. “I was told ‘Go back to Pakistan. Don’t tell us where we can go in our own country, this is our stadium. All lives matter, but not P*ki lives.’”

He says he was in fear of his own safety, but more worried that “a lot of people could die here, right in front of me.”

A flood of disturbing information continues to stream through about what happened at Wembley, which poses significant questions. The FA have been approached for comment on the allegations, but are yet to respond.

Wise Security say they “cannot comment on this at this time.”

While the unacceptable actions of ticketless fans was deplorable and central to the dangerous scenes on Sunday, there was also a “serious failure of security and stewarding,” according to a safety officer of a Premier League club. Accountability must follow.

He was “completely staggered” by what he saw unfold at the stadium. He reached out to The Independent, but asked for his identity to be protected. His account of events tallies with a stream of testimonies from several different stakeholders.

“I can categorically tell you that the majority of stewards I directly came across or watched on Sunday had no training for the role. I would put money on it that a lot of them have never worked a big football match before, or any kind of match. They were young, out of their depth, and the ones who innocently turned up to do what must seem a fun job are also victims of what happened.

“Who was the stadium safety officer? What was the plan and protocol? Was every steward clued up on the layout and what to do in case of any and all emergency situation?

“What I saw on Sunday is a product of what we’ve seen for a long time in my line of work: cost-cutting and loss of quality control. There are very few solid, reputable security companies. Most will hit the number of stewards by any means necessary, which includes not bothering whether they have an NVQ or not.

“And I have to also say, we need to seriously up our standards for stewarding because a child could pass the tests. We are complacent and that plays into what we saw on Sunday.”

One high-level source with knowledge of fan safety at football tells The Independent: “I’m reliably informed the FA had a crisis with stewarding numbers because so many understandably opted to watch the match at home rather than stand outside the stadium for £10 per hour.

“Clubs sometimes have similar issues so they reach out to other clubs for help, I’m pretty sure the FA didn’t do anything similar.”

The FA have pointed the finger at the Met police for the mayhem at Wembley, but the stadium is completely under its authority, with the responsibility for its immediate vicinity shared with Brent Council and the Greater London Authority.

The police have no input on how the event would be managed in terms of securing the stadium.

As per the Sports Grounds Safety Authority: “Responsibility for the safety at a sports grounds lies at all times with ground management.

“Whether there is a police presence or not, responsibility for the enforcement of ground regulations remains with the stadium management. Police officers are not present to overcome inadequacies in safety management.”

Several sources have told The Independent that the local council and the FA do not want strong numbers of the force around as “its bad for optics.”

A Brent Council spokesperson responded: “The council and Safety Advisory Group partners expect the police to provide an adequate and appropriate police presence on all Wembley event days and do not seek to influence the Police Commander in determining what that presence should be.”

Tim Roberts, who has lived across Wembley for 16 years and was involved in the building of it, says the priority has been “ensuring the value of the area for retail and residential investment.”

He says that Quintain, the development and asset management team behind Wembley Park, wields massive power in the area.

“The local council, Quintain and the FA have an uncomfortably close relationship, which means there is no scrutiny. We are yet to have a comment from anyone political in Brent after what we saw on Sunday, which is shocking.

“It’s as though nothing happened when we were very lucky that there wasn’t a loss of life. All the blame has been placed on the fans, but they are not solely responsible. The management of the stadium and the area around it has been appalling. Whenever issues are pointed out, it’s brushed under the carpet.

“I have spent the last few days removing far-right insignia and even acknowledging there is a large element of that accompanying England and games here just goes ignored. It’s about pretending everything is great, Wembley is great, Wembley Park is great.”

A glance at the Wembley Stadium Twitter account would co-sign that. But this cannot be brushed under the carpet and crucial questions cannot be left unanswered.

Harry Kane: The factors that will decide Tottenham transfer saga