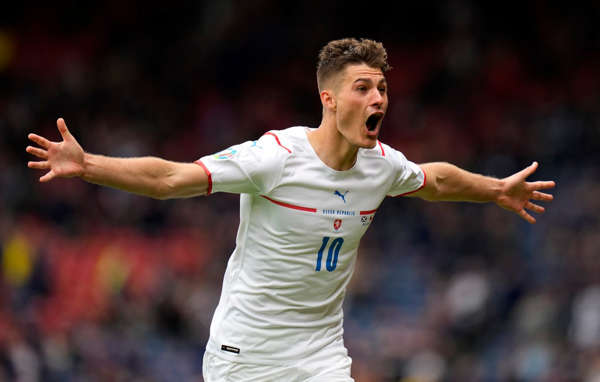 This is now the story of another long shot. Scotland must beat one of England or Croatia to survive in Euro 2020, after one of the greatest goals in the competition’s history turned a grand homecoming into another vintage tournament defeat.

Patrik Schick certainly found his own range, his homing missile of a strike the second of two that secured a 2-0 win at Hampden Park for a much cooler Czech Republic side. Talk of 23 years instantly became awe at 50 metres, as that was how far out Schick attempted his audacious strike.

There was a moment during the three seconds the ball was in the air, when it was probably just about at its high point, that the day reached a low point for Scotland. You could almost sense – and see and hear – the realisation that this was so well it was going to drop perfectly. It was also the moment when a previously raucous atmosphere properly became funereal, the silence only punctuated by occasional rebukes at no one and everyone.

On that, it would be difficult to blame David Marshall too much given the sheer quality of the strike, that basically meant if he wasn’t near the goal this was definitely going in. It was an issue of physics as much as a fantastical finish. The goalkeeper was still responsible for the kind of rush of blood to the head that was symptomatic of the Scottish players on the day.

They were simply outdone.

Schick’s goal will go down as one of the most memorable moments in the history of the European Championships but, on the day itself, it was just another illustration of the superior Czech precision that won the game.

In contrast to that, there was a period when Scotland were basically trying to get lucky off a deflection.

It so jarred with everything that had come before. There had been a genuinely special atmosphere at Hampden in the hour before the game. Flower of Scotland was sung with a unique enthusiasm, but even that was nothing compared to the reaction – and unison – when cult song ‘Yes Sir, I Can Boogie’ was played. This was what we’d waited for. This is what football crowds – and just live crowds – are all about. It’s just we also saw what the history of Scottish football tends to be about.

They weren’t full of hesitation, but that was kind of the problem. They kept their reputation.

As tends to happen with occasions like this, much of Scotland’s attacking play was highly frenzied rather than any way forensic. It was as if they were trying to overwhelm the Czechs with sheer force of emotion. There was one moment when Ryan Christie did jink his way through on the right, only for Stephen O’Donnell to literally get ahead of himself and run into the way.

Both Steve Clarke and Andy Robertson at various points in the first half exhorted the players to calm down, although the captain could maybe have done with heeding his own advice. He was everywhere in play, and integral to everything Scotland did that was good – but also some bad. Robertson was late on a few challenges, and perhaps fortunate not to have been cautioned. You could say his team were unfortunate not to go ahead with two chances – both, of course, down the left – but there was again a frenzied nature to the moments.

For the first, Lyndon Dykes swept wide from Robertson’s ball with an instinctive touch. For the second, Robertson himself shot too high when he probably could have had another touch.

The Czechs realised how to play, and were soon facing boos when they began to pass the ball around to take some of the energy out of the occasion. They weren’t creating too much trouble at the other end but that was kind of the point. Jaroslav Silhavy’s team just caught Scotland out.

The Czechs suddenly picked up the pace for their own corner, Vladimir Darida playing in West Ham United’s Vladimir Coufal to cross for Shick. As was to become fitting for the day, and almost symbolic, he rose highest to ensure he could head the ball past Marshall with ease.

The truth at this point was that Scotland just needed more guile. They instead offered more emotional will, as if trying to force the ball into the net. It was here that they seemed to become almost dependent on a deflection.

Jack Hendry did almost catch the excellent Tomas Vaclik out with an arched shot onto the crossbar, before the goalkeeper scrambled to keep out a Tomas Kalas interception that looped back over him.

It was a warning – at the wrong end. One of those deflections eventually fell for someone, but it was for a Czech counter-attack. With Scotland pushing up so far that Marshall was near the halfway line, the ball came through to Schick. The goalkeeper literally turned on his heels to desperately dart back, but it was futile. As he came just inside the Scottish half, Schick released it – first-time.

It dropped into the net so masterfully, if so miserably for Scotland.

A long shot had won the game. That’s what these European Championships have become for Scotland.

They won’t feel very much like talking. They need a different song. The only sound at the end was boos from the Hampden Park crowd. Schick hit the right note.