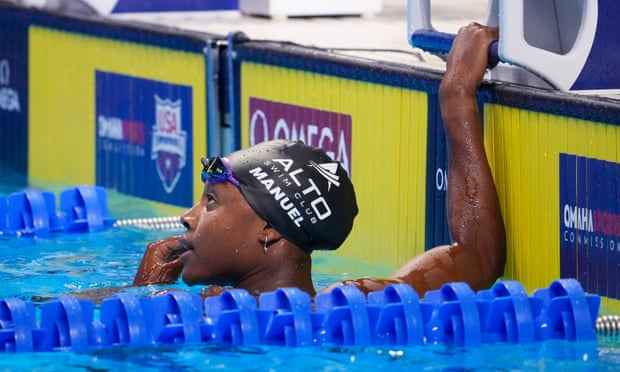 In the biggest surprise yet at the US swimming trials, reigning Olympic champion and two-time defending world champion Simone Manuel failed to advance from the semi-finals in the 100m freestyle Thursday night.

Manuel – who made history in Rio when she became the first African American woman to win an individual swimming gold medal, then backed it up (and then some) with eight more titles at the 2017 and 2019 world championships – finished fourth in the first semi-final heat at 54.17 seconds.

The 24-year-old from the Houston suburb of Sugar Land just missed a spot in Friday night’s final when five swimmers went faster in the second semi-final heat, with Erika Brown taking the eighth spot in 54.15 – two-hundredths faster than Manuel.

Natalie Hinds and Olivia Smoliga were the top qualifiers in 53.55. Allison Schmitt, who already made the team in the 200 free, advanced to the final with the sixth-best time (54.08).

Manuel’s failure to make it to the 100 free final means she won’t be in the mix for the relays, either. She still has a chance to qualify for the team in the 50 free – an event she took silver in as part of a four-medal haul at Rio.

In the men’s 200 breaststroke, Nic Fink made the Olympics for the first time at age 27, winning with a time of 2:07.55 in a 1-2 finish with club teammate Andrew Wilson.

Fink failed to finish in the top two at either the 2012 or 2016 trials, and he had another heartbreak with a third-place showing in the 100 breast this year.

Now, finally, he’s got his long-sought spot on the Olympic team.

“It’s something I can’t really describe,” Fink said. “Relief is only the beginning of what I’m feeling right now. It’s a long journey to come here. I’ve had so much support and help. I’m so grateful for this opportunity and to come back after getting third in the 100.”

Wilson, who swims with Fink on the Athens Bulldog Swim Club in Georgia, earned a likely second individual event at the Tokyo Games with a runner-up finish in 2:08.32. Wilson also finished second in the 100 breast.

“It’s really fun to see it pay off for Andrew and I,” Fink said.

Kevin Cordes, who made the 2016 Olympic team in both breaststroke events, came up short this time. He was a distant fourth, nearly 2 seconds behind Wilson.

“It’s tough to see him not make it,” Fink said.

The U.S. team added another first-time Olympian when Bobby Finke of Clearwater, Florida won the men’s 800 freestyle, an event that will make its Olympic debut in Tokyo.

He covered 16 laps in 7:48.22, holding off runner-up Michael Brinegar (7:49.94). Ross Dant just missed an Olympic spot, finishing a mere 72-hundredths behind Brinegar in a thrilling finish.