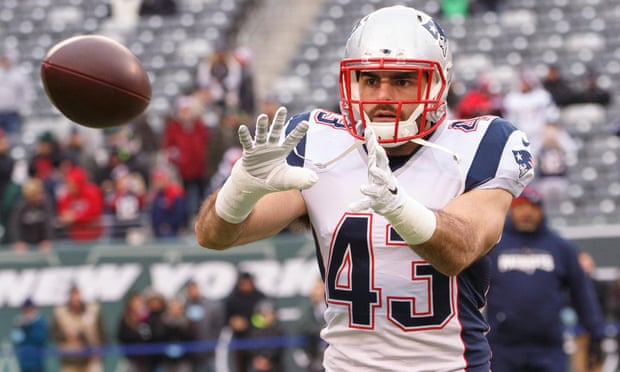 The NFL player Nate Ebner has withdrawn from contention for a second trip to the Olympics with the USA men’s rugby sevens squad, citing an injury sustained after the 2020 NFL season he spent with the New York Giants.

“It pains me to announce my withdrawal from competing for a spot at the Tokyo Olympics with the USA Men’s Sevens,” the special teams player, who won three Super Bowl rings with the New England Patriots, said in a release from USA Rugby.

Ebner first swapped codes in 2016, winning a place on the US team at the Rio Olympics. In March this year he announced his second return to a sport he played for Ohio State and US national junior teams.

“I’ve been playing NFL football for the last [nine] years and that’s not easy on your body,” Ebner said then. “Over 30 in the NFL is an old person. In rugby, there are some older guys, but really it’s not about me being 32 in rugby, it’s the journey I’ve had.

“There are guys who are 24 and they’ve had all kinds of injuries. Everyone’s personal situation is different with their body and their age and the wear they’ve had to endure, so hopefully I can hold up.”

On Tuesday, announcing his withdrawal, Ebner said: “While my recovery is on track for the next football season, unfortunately, the time tables did not align with trials for the Games.

“Thank you to USA Rugby for welcoming me back into the squad like family. And thank you to the players working so hard to make the Olympic team and help the United States bring home a medal.”

Ebner also thanked the Giants and his supporters and said he looked forward to the next NFL season.

Mike Friday, the USA sevens coach, said: “We are all disappointed for Nate and appreciative of his efforts to rejoin the squad and make a run for Tokyo.

“Physically, Nate has not had the opportunity to compete, therefore he cannot be considered for selection.”

The US will compete in Los Angeles this weekend in a special “Quest for Gold” Olympic warm-up event. Friday will announce his squad on 2 July.

The US men finished ninth in Rio five years ago but have made progress on the world sevens circuit, finishing second to Fiji in 2019.

Last month, Ebner released an autobiography, Finish Strong. The book’s subtitle is A Father’s Code and a Son’s Path, a tribute to Jeff Ebner, murdered 13 years ago.

Speaking to the Guardian in 2016, Nate Ebner said: “I think Dad would be proud of me and I’m proud he was my Dad.”