Home » ‘I can still compete with the best’: Andy Murray upbeat for Queen’s Club return
Tennis 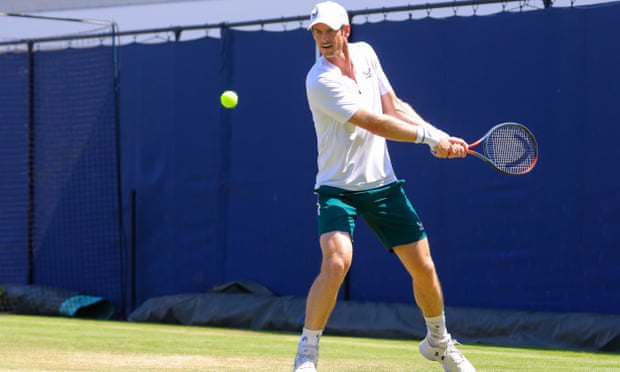 Andy Murray believes he is still capable of competing with the top players in the game as he returns to competition this week at Queen’s Club in London.

“I know that I can still compete with the best players in the world,” Murray said. “I have been doing it consistently in practice over these last six months, seven months, and certainly on the grass I don’t see why not.

“You can speak to the players about that as well. I have practised with lots of them. My level is still good. It’s just I need my body to hold up, and it’s been extremely frustrating for me with all the different issues.”

Murray is scheduled to compete on Tuesday afternoon against Benoît Paire in his first singles match since sustaining a groin injury in March. Throughout his pre-match press conference he struck a balance of hope and caution: the confidence he still has in his own game is clear, but that positivity was tempered by having had so many physical issues in recent years. He says he has been practising well and consistently and that he is feeling “OK”, although not perfect.

“I have been feeling good at different points throughout the last nine months or so and, you know, practised really well, felt good going into tournaments,” he said. “Then something’s happened or whatever happened in Miami. I can’t say with any great certainty I will be OK. I mean, I hope I will be, because I’m sure and I have seen enough again in practice that my tennis is fine and in a good place.”

Murray also offered his perspective on Novak Djokovic’s French Open victory. He was not surprised by Djokovic’s ability to recover from his semi-final win against Rafael Nadal and he expected the world No 1 to beat Stefanos Tsitsipas in the final as soon as he broke serve early in the third set, even though he was still two sets down.

Asked whether he feels that Djokovic has fortified his argument as the greatest of all time with his victory, Murray said he is uninterested in that discussion. “All of them have things or achievements that you could argue make them better than another,” he said.

“I don’t know if they are, maybe they are, but I’m not that fussed about who is the best. I think there is no doubt that it’s been the best era in tennis history.”

Murray is more interested in what they have achieved collectively, particularly considering many people thought Pete Sampras’s count of 14 grand slam singles titles, set just a year before Federer’s first Wimbledon title, would not be beaten. “Then you’ve got three guys that are probably going to win 20-plus majors in the next generation. So it’s incredible what all of them have done.

“It’s been great to have played during that period and also challenging, but yeah, I think as a tennis fan it’s been a great, great time to get to watch it and play a small part in it as a player as well.”

While discussing his own future, Murray said discussions with his old coaches and former players about retirement reaffirmed his conviction to play for as long as possible. “Unanimously, they were all like: ‘Look, it was extremely difficult to stop playing and our advice would be to play as long as you can, so long as you are still enjoying it and providing your body can still do it.’ Which maybe there are question marks over mine in that respect. They were like: ‘Nothing replaces it.’ I want to keep playing as long as I can.”

As Murray trained on Thursday afternoon with the young Australian Alexei Popyrin, a session that offered little indication of his physical shape as he only practised his serve and return, the 19-year-old British player Jack Draper painted a hopeful picture of the future. Draper, a junior Wimbledon finalist in 2018 who has recently struggled with injury and is ranked No 309, stood up to the moment by defeating the world No 23 Jannik Sinner, the third seed, 7-6 (6), 7-6 (2), for his first ATP win.