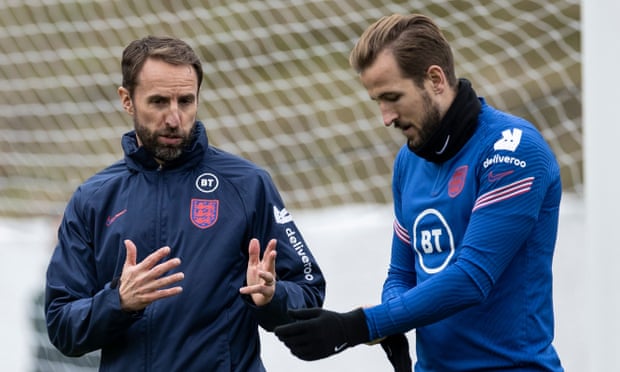 International football is different. It’s not like club football. It has gone from being the highest form of the game – the stage on which the average level of the players was greatest – to lagging behind the club game, to being barely the same sport. Elite club sides now are sourced from the very best available parts and fine-tuned over weeks and months of training. National managers have neither the luxury of signings nor time, and so the priorities are different.

The best club sides over the past decade – the Barcelona of Pep Guardiola and Luis Enrique, the Bayern Munich of Jupp Heynckes, Guardiola and Hansi Flick, Jürgen Klopp’s Liverpool and Guardiola’s Manchester City – have been aggressive and fluent. They have operated with a high press and played largely on the front foot, prioritising the cohesion of the unit. As Real Madrid keep proving, it is still possible to succeed by – and this is an oversimplification – having brilliant individuals doing brilliant things at key moments, but their comparative lack of league success suggests the unreliability of the approach over a sustained period.

International football is not like that. With the arguable exception of Chile in 2015 and 2016 (and even their two Copa América triumphs came after 0-0 draws in the finals), no team has won a major international tournament with a predominantly proactive approach since Spain at Euro 2012. There will be those who point to Germany at the 2014 World Cup but, following a shaky start to that tournament, they prevailed after Joachim Löw returned to the counter that had served him so well in 2010; the 7-1 in the semi-final was the result of hysterical Brazilian collapse and ruthlessness on the break rather than waves of attacking.

But even if Germany are accepted as a borderline case, they share with the great Spain of 2008-12 the trait of being based on one great side – Bayern and Barça, respectively. (And Spain, it should not be forgotten, were far less exciting than Barça, their possession-heavy football criticised by some as being clinical and bloodless. The World Cup win in 2010 was achieved with four successive 1-0 wins.)

International football isn’t attacking. France, the world champions, have a glittering squad but their football is functional. So too was that of Portugal when they won the Euros in 2016. So was that of Brazil when they won the Copa América, of Algeria when they won the Cup of Nations and of Qatar when they won the Asian Cup, all in 2019. Those who look at Gareth Southgate’s slightly cautious approach and demand he shoehorn in half a dozen of England’s array of gifted young forwards are living in a dreamworld. Equally to suggest he should “build the team around” one gifted creator is to ignore how football has changed over the past 30-40 years

National management is far more about creating the right environment than club management. It’s not about the sort of detailed tactical planning required at club level; there simply isn’t time. Perhaps, if you’re Guus Hiddink given long training camps with South Korea for the 2002 World Cup, or if you’re Marcelo Bielsa or Jorge Sampaoli working with a limited squad of players over a long period with Chile, you can attempt something more ambitious, but essentially national managers have to keep things as simple as possible. With an ever-changing squad that meets up for a week once a month, at best, it’s simply not possible to do anything else.

In Russia, Southgate opted for a back three, although his main success came from the realisation a little work on set-piece routines can go a long way. The doubt then was over in-play decisions: inviting pressure late on against Colombia in a game England had dominated, and being slow to respond in the semi-final as the Croatia full‑backs advanced and left England overmanned in midfield.

The home win against Belgium in the Nations League was the result of a half-time tweak, while against Poland in the most recent World Cup qualifier Southgate was rewarded for keeping faith with his starting lineup even as the visitors’ equaliser seemed to demand changes. That may suggest improvement but judging a manager on a tiny sample size of examples that are, anyway, contingent is probably unwise

The post-World Cup switch to a back four seemed an attempt to make England more creative and, although it brought the 3-2 win in Spain that probably remains the high point of Southgate’s reign, it also left England vulnerable, something exposed in the defeats by the Netherlands and the Czech Republic, and in the 5-3 home win against Kosovo.

So the back three returned for the Nations League games last year (results: mixed, although probably more to do with the quality of opposition and Harry Maguire’s red card against Denmark than the system itself), only to be abandoned for a 4-3-3 again in the World Cup qualifiers in March – you hope because Southgate genuinely believed that was the best way to get the most out of the players available and not because of media pressure.

The structure appeared simple: a back four in which the left-back is likely to be more attacking than the right, who will need to slide across as cover (which is why, even before his injury, Trent Alexander‑Arnold, whose attacking instincts are best deployed in hard‑pressing teams, never seemed a likely starter); a holder, a shuttler and a more creative player (the balance of which can be tweaked according to the opposition); and a front three of Harry Kane, a passer to link with midfield (Phil Foden or Jack Grealish) and a runner (Marcus Rashford, Raheem Sterling or Jadon Sancho) to go beyond Kane when he drops deep.

The absence of Maguire could mean the return of a back three, with a centre-back replacing one of the creators, while the form of Grealish in the last two friendlies raises the possibility of something more akin to 4-2-3-1, which would probably mean Mason Mount alongside Declan Rice at the back of midfield – an intriguingly attacking lineup but one that goes against the trend in successful international football.

Can Southgate risk that? Can he risk it at this stage? Perhaps, but then the major doubt about his management isn’t about the basic setup.