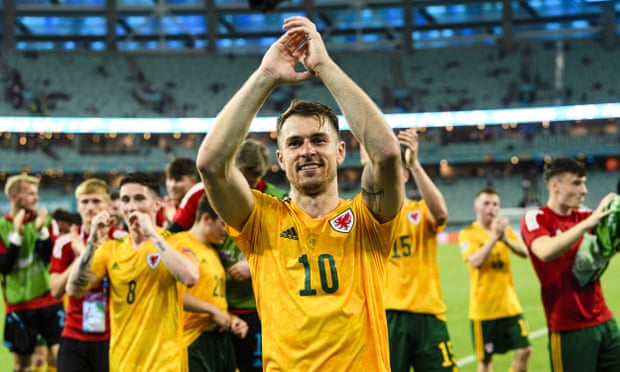 In Wales Aaron Ramsey is a symbol of their finest moment, the night they rode into the semi-finals of a European Championship. Behind that comeback victory over Belgium was a peerless performance by the midfielder, with bleach-blond hair and a magnetic touch, seemingly at his peak. But two underwhelming seasons at Juventus mean that in Italy, where Wales play their final group game on Sunday, Ramsey is regarded an unfulfilled talent.

Ramsey arrived to fanfare, with television cameras following his every move in Turin and with a glowing endorsement from the then head coach, Maurizio Sarri. Andrea Pirlo, Sarri’s successor, also referenced Ramsey’s talent last December. “Ramsey was a revelation to me,” said Pirlo, who took charge of Juventus in August, after nine days in charge of the under-23s. “I had no idea he was such a good and smart player but unfortunately we have only had him at 100% on a few occasions.”

Ramsey himself spoke about trying to emulate John Charles’s success in Piedmont given the centre-forward, known as “Il Gigante Buono” – the gentle giant – won three Serie A titles in five prolific seasons at Juventus. Charles also starred in Wales’s only World Cup campaign, in 1958, although Ramsey could follow suit if they qualify for Qatar 2022 next year. Ramsey arrived in Turin to a warm welcome and much optimism following the high note on which he ended at Arsenal. But Juve have only seen glimpses of the kind of poise and guile he displayed against Turkey on Wednesday.

Injuries have badly disrupted his rhythm for some time and in Italy the midfielder has also been a victim of instability at the top, new systems and personnel. Ramsey has equally been critical of the way he has been managed by the Juventus medical team.

Ramsey has flourished when available for his country but has proved something of an enigma since that extraordinary night in Lille five years ago. He is set to start three games in a row for the first time in 16 months and a bespoke fitness programme devised by his own physio team, in conjunction with the Football Association of Wales, has helped him arrive at this tournament in a good place. He was the catalyst for helping Wales all but secure their place in the last 16 against Turkey on Saturday. But before the group opener against Switzerland, he had started only four of Wales’ previous 24 matches, including the decisive qualifying victory over Hungary in Cardiff.

In some ways, Ramsey is Wales’ forgotten superstar, often caught in the shadows of the dazzling Gareth Bale, another who turned in a magnificent performance in midweek. “He’s had injuries in the last two years but we are thankful he’s with us now,” says the Wales winger Daniel James of Ramsey. “He’s been with us and he’s been brilliant around the place and on the pitch he’s always working hard for the team. What he gives going forward is brilliant. He’s exactly what you see on the pitch – he works hard.”

Those who have played with Ramsey reference his bravery, not in terms of crashing into tackles – although he did that against Turkey, digging into the energy reserves to dispossess Mert Mulder just as the substitute looked to pull the trigger – but by way of always showing for the ball, volunteering to take a pass in a tight space, and acrobatically flicking on in search of a teammate, as he did so nonchalantly for Bale against Switzerland. He manipulates the ball with such confidence that there is never concern about whether it will reach its destination.

Ramsey’s tournament went from 0-60mph in 90 minutes against Turkey and now the No 10 will be hopeful of repeating the trick in familiar territory. His wife and three children are expected to be in attendance at the Olimpico in Rome. He could show Italian fans what they have too often been missing.