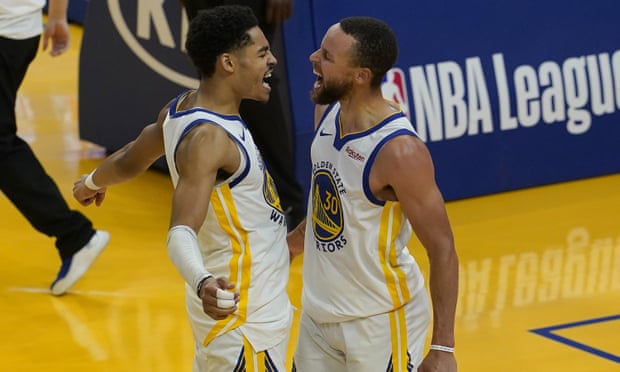 Stephen Curry became the oldest scoring champion since Michael Jordan in 1998, finishing with 46 points as the Golden State Warriors held off the Memphis Grizzlies 113-101 on Sunday in a regular-season finale that determined the play-in tournament’s eighth and ninth spots.

The Warriors wrapped up the No 8 seed and will play on Wednesday, while Memphis finish at No 9 and will host the Spurs on Wednesday. Golden State’s opponent will face the Los Angeles Lakers on Wednesday, setting up a delicious face off between Curry and LeBron James. The winner of the game involving the Warriors and Lakers will be the No 7 seed in the West playoffs and face the Phoenix Suns; the loser of that game will play the Memphis-San Antonio winner on Friday to be the No 8 West seed. The No 8 seed will then face the No 1 seed in the West, the Utah Jazz.

James on Sunday said that Curry deserves to be this season’s MVP. “I mean, just look at what he’s done this year,” James said. “I don’t know anything else if you’re looking for an MVP. If Steph is not on Golden State’s team, what are we looking at?”

At 33, Curry and Jordan are the only scoring champions age 33 or older. Curry also joins Jordan, Wilt Chamberlain and Kareem Abdul-Jabbar as the only players with multiple scoring titles, MVPs and championships. Two-time MVP Curry locked up his first scoring title since 2015-16 with his second basket of Sunday’s game late in the first quarter. He made nine of 22 three-pointers and also contributed nine assists and seven rebounds in Golden State’s sixth straight win. Curry averaged 32 points during his second 2,000-point season.

Elsewhere, the Eastern Conference matchups are set after Sunday’s games. No 7 seed Boston will host No 8 Washington, and No 9 Indiana host No 10 Charlotte in the NBA’s first elimination game this season. Both of those games are Tuesday.

The Boston-Washington winner goes straight to the playoffs as the East’s No 7 seed; the loser of that game will host the Indiana-Charlotte winner on Thursday to determine the East’s No 8 seed, who will face top-seeded Philadelphia in round one of the playoffs proper.

Getting to the play-in round is a massive comeback story for the Wizards, who started the season 0-5 and 3-12, were shut down for two weeks in January for coronavirus-related issues, had to play 38 games in the season’s final 67 days to make up for all that lost time and were 17-32 early last month.

They’re 17-6 since, rallying from 16 points down to beat Charlotte on Sunday and with Russell Westbrook the league’s all-time triple-double king getting his 38th one of the season.

“Obviously, Washington’s rolling,” Celtics coach Brad Stevens said. “They’re a heck of a basketball team. … They’re a handful. Tuesday night’s going to be one heck of a challenge.”

Meanwhile, New York who were sent home after the regular season in each of the last seven years not only are back in the playoffs but will open them at home. New York’s win over Boston locked the Knicks into the East’s No 4 seed and a first-round matchup against No 5 Atlanta.

That means reigning East champion Miami will open as the No 6 seed. The Heat will open the playoffs at Milwaukee.