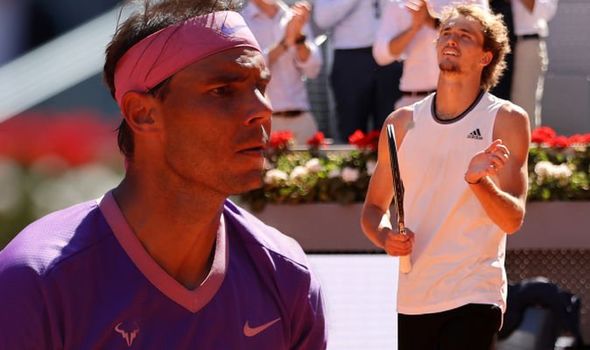 Rafael Nadal was not a happy man after Alexander Zverev overcame the Spaniard in straight sets to reach the Madrid Open semi-finals on Friday afternoon. The 34-year-old has earned a formidable reputation on clay over the course of his career, but he was unable to prevent his German opponent from sealing a famous victory with a hugely impressive showing in the Mediterranean sun.

Zverev struggled to get going at the start of the match, with Nadal storming to a 4-2 advantage in the opening set, but recovered well to break his opposite number twice and claim the early spoils.

He followed up with a cultured showing in the second to keep the Manacor native at arm’s length, sealing a 6-4 6-4 win and booking his place in the last four of the Madrid Open.

Zverev will face reigning US Open champion Dominic Thiem in their semi-final clash on Saturday.

The result marked the 24-year-old’s third straight win over Nadal, who will see his lacklustre defeat as a crushing blow ahead of the French Open later this month.

The latter admitted after the match that he was hugely disappointed with his own performance, lamenting his capitulation in the first set that ultimately decided the momentum of the tie.

“I was in control [of] the first six games,” explained Nadal. “When I served at 4-2, I made a disaster and then [had] another bad game.

“If that happens to you with one of the best in the world and with a court at this speed, it is difficult to keep up.

“Being better than him in the first set, I lost 6-4. It is a complicated thing to understand and more in me that sometimes I win sets [despite] being inferior to the rival.

“I have made unjustifiable mistakes when you didn’t have to do them. It is a difficult week for me.

“I am climbing a ladder and today I have taken a step back. In the moments of truth I have done everything wrong.

“Serving for 5-3 I have made several mistakes, and then at 4-3 I missed a parallel forehand on break point. I’m sad about the defeat because it’s a missed opportunity.”

Nadal made a number of uncharacteristic errors during Friday’s match that allowed Zverev to take control and deservedly progress to the semi-finals in Madrid.

Although his performance was far from acceptable for a player of his standards, the Spaniard will be hopeful of clinching a 21st Grand Slam title at this year’s French Open.

Before travelling to Paris, Nadal will try his luck at the Italian Open in order to find some positive momentum.

He revealed in his post-match press conference that another trophy will be the target in Rome, underlining his desire to build on last month’s triumph in Barcelona.

“Where the clay season stands is very simple: quarters, champion and quarters,” said Nadal. “And now comes Rome. That’s all there is.

“We’ll see what happens in Rome. For me, the objective before Roland Garros is to go to Rome and win it. That’s the truth.”