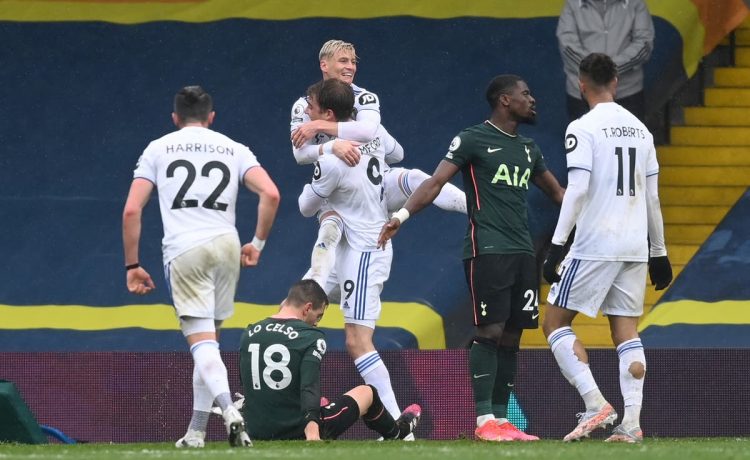 The collective strength of Leeds United showed up Tottenham’s star names and derailed their outside chance of sneaking into the top four with a comprehensive 3-1 triumph at Elland Road.

Marcelo Bielsa’s impressive charges moved to ninth with 50 points, while Spurs are sixth and five points off fourth-placed Chelsea, who have a game in hand.

The first half provided an overflow of entertainment as the approach of both sides demanded front-foot endeavour. Tottenham, opting to field their full offensive might by selecting Harry Kane, Dele Alli, Son Heung-min and Gareth Bale, showed the beauty and imbalance of that choice.

The attackers combined in silky pieces of play, one of which resulted in their goal, but Spurs often overcommitted going forward to leave themselves incredibly exposed.

Leeds, more purposeful in possession and cohesive out of it, worked to profit from the wide areas. Serge Aurier was particularly targeted with the knowledge that Bale would not do much tracking back with verve.

Jack Harrison’s fingerprints were on much of Leeds’ best bits in Saturday’s early kick off, while Stuart Dallas ensured Sergio Reguilon had an afternoon to forget.

The pair were involved in the opener that arrived on 13 minutes. Eric Dier swiped at but was unsuccessful in clearing Harrison’s super cross into the six-yard box from the left. Reguilon stuck out a leg to thwart it, but the ball required brilliant intervention from Hugo Lloris to prevent an own goal.

Dallas was alert to the loose ball though and stuck the rebound into the roof of the net with a powerful finish.

Leeds were pushing Spurs back, but the power of their attacking force told in a stunning passage. A sweet run from Alli down the middle, attracting the attention from a few markers, ended with a dinked pass to release Son.

He slotted into the bottom right with a lovely finish, the space and angle opened up by Kane drawing a defender away.

The intelligence, speed and efficiency of that interplay illustrated the threat of Tottenham’s weaponry.

This was further seen when Son and Alli supplied Kane for a goal that was ruled out due to a supremely marginal offside.

But the majority of the match spelled out the folly of not having enough protection for offensive moments and relying on individuals rather than a solid team structure.

Leeds pulled ahead again before the break with wonderful collective work. Reguilon switched off, with Dallas beating him to retrieve a loose Dier header. Harrison slipped in Ezgjan Alioski, untracked by Bale, into space down the left.

Leeds confirmed the victory late on with Rodrigo converting a clinical break with Spurs desperately open again as they chased a way back into the match.