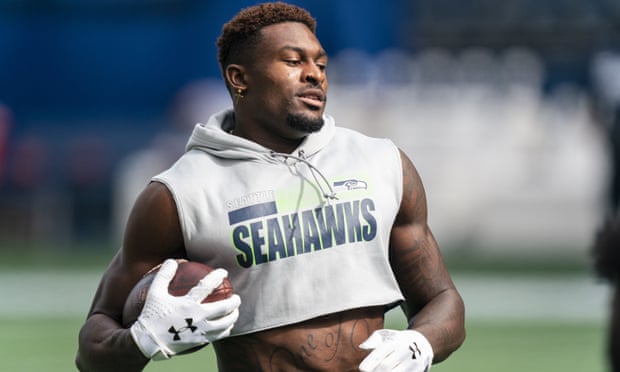 “Football players don’t have any clue.”

That was the verdict of 2016 US Olympian Mike Rodgers as National Football League wide receiver DK Metcalf prepares to compete in the 100m sprint at Sunday’s USA Track and Field (USATF) Golden Games and Distance Open in Walnut, California.

The Seattle Seahawk, who posted a 4.33sec, 40-yard dash at the 2019 NFL combine, is competing in hope of earning a spot at next month’s US Olympic track and field trials in Eugene, Oregon.

But veterans of the track were skeptical.

Rodgers, who will compete against Metcalf in the 100m on Sunday, told reporters in an online media briefing that he watched video of Metcalf’s combine performance and believes he saw the wide receiver’s energy flagging near the end.

“And he has to do it twice – and that’s if he gets through the first round,” he said of Sunday’s competition. An attempt to reach Metcalf’s agent on Thursday was unsuccessful.

Rodgers, who picked up gold in the 4x100m relay at the 2019 world championships, said NFL players often do not have the mechanics and weight distribution techniques of sprinters.

“The track and field community has been going back and forth with the NFL community as to who’s actually fast and who’s not,” said Rai Benjamin, who won gold at the 2019 world championships in the 400m relay and will compete in the 400m hurdles Sunday.

“By no means am I discounting DK. I think he’s a phenomenal athlete and it takes a lot of guts and heart to actually come out and line up against the guys that are in the field.”

“There’s not a sprinter in the world who will let this guy think he can run with them. They will destroy him,” Nehemiah said. “It’s a noble gesture but an exercise in futility. It really is. No offense to DK, I’m a fan of his.

“I applaud him for wanting to find out – and find out he will.”

On Friday, the retired American sprinting great Michael Johnson, a four-time Olympic champion who remains the only male athlete in history to win the 200m and 400m at the same Games, waded in to the discussion in defense of the NFL star.

“With [Metcalf] competing this weekend at @usatf meet, sprinters rightly feel disrespected,” Johnson tweeted. “People don’t understand their talent. But that’s not DK’s fault or the media’s fault. The sport has done little to show the immense skill and talent it takes to run 100m in under 10 seconds.”

What really got people buzzing about Metcalf’s blazing speed was when he chased down Arizona defensive back Budda Baker from behind after an interception to prevent what seemed to be a sure touchdown last season. Metcalf made up nearly 10 yards on Baker and reached a top speed of 22.64mph in pads and cleats. He ran 108.8 yards on the play to tackle Baker short of the end zone.

“That was one of the best football plays I’ve ever seen,” Seahawks coach Pete Carroll said after the game.

“But if you put a world-class track athlete in the same spot, he would be 10 meters in front of Baker and waiting for Baker,” Nehemiah said. “People just don’t understand world-class speed.”

The speed of a sprinter is more linear, with mechanics and transitions focused on being as straight as possible. The speed of a football player tends to be more horizontal, and centered around quick five- to 10-yard bursts.

“I hope he doesn’t think he’s getting out here with some average Joes,” said Rodgers, who will be one of the favorites in Sunday’s 100m race. “It’s a pride thing for track athletes. We’ve been hearing about this for so long. So giving him a proper introduction to track is going to be everything to everybody in the track world.”

For decades, track standouts have been challenged by the speediest athletes in other sports. Like Hall of Fame receiver Terrell Owens trying to set up a friendly competition with 2004 100m Olympic gold medalist Justin Gatlin, who’s still in elite form at 39 and among the favorites to make the team for the Tokyo Games.

It simply comes with the territory. Everyone wants to see how they measure up in a race.

Although a hurdler, Nehemiah was challenged to races while a receiver for the 49ers from 1982-84. He also was told to slow down by his teammates during practices.

“The guys used to get mad at me in wind sprints, because I was leading by so much and it made them look bad,” said Nehemiah, who had 43 catches for 754 yards and four TDs in 40 games with the 49ers. “I’m like, ‘I’m not even running, just jogging.’”

Rodgers will be impressed should Metcalf break 10.2sec. If he doesn’t run faster than 10.5 then, well, “football players should have no business having a conversation with us,” Rodgers cracked.

Metcalf would need to record 10.05 or better to earn an automatic invitation to the US Olympic trials next month in Eugene, Oregon.

He’s about 20lbs heavier than Bolt was in his record-setting prime. The Jamaican sensation also powered his way to the 200m world record (19.19).

“DK’s a big guy. If he gets a good start and gets rolling, he might break 10.3,” the 36-year-old Rodgers said. “But he’s not going to be in his environment for sure this weekend.

“He could be in warmup and see us warming up and be like, ‘Oh no, I’m not racing these guys.’ He could pull one of those. Until he lines up, there’s nothing really I have to say. He’s in the race. I hope he comes out and competes.”