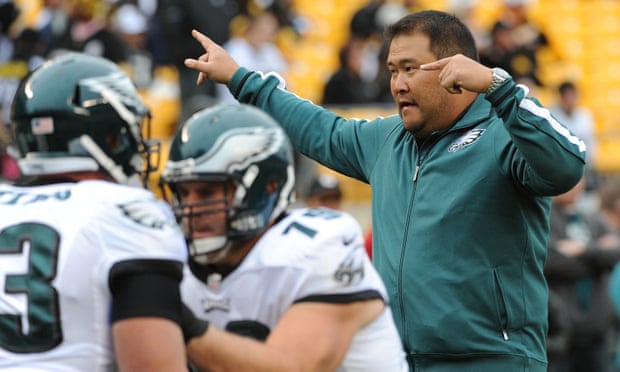 The NFL is investigating an allegation by the former New England Patriots player Eugene Chung that he was told he was “not the right minority” during an interview for a coaching role.

Chung, who is Korean American, did not name the team allegedly involved. He said the comment came after he was initially told he was “not really a minority”.

“I was like, ‘Wait a minute. The last time I checked, when I looked in the mirror and brushed my teeth, I was a minority,’” he told the Boston Globe. When Chung asked what the interviewer meant he was told he was “not the right minority that we’re looking for.”

The 51-year-old played five seasons in the NFL before serving as an assistant coach for the Philadelphia Eagles and Kansas City Chiefs.

“I asked about [the comment], and as soon as the backtracking started, I was like, ‘Oh no, no, no, no, no, you said it. Now that it’s out there, let’s talk about it,’” Chung said. “It was absolutely mind-blowing to me that, in 2021, something like that is actually a narrative.”

The NFL said on Monday it is reviewing Chung’s comments. “That comment is completely inappropriate and contrary to league values and workplace policies,” the league said in its statement. “The NFL and its clubs are committed to providing equal employment opportunities to all personnel in a manner that is consistent with our commitment to diversity, equity and inclusion.”

The Fritz Pollard Alliance, which promotes diversity in the NFL, said it was disappointed by Chung’s story. “If the comments regarding his status as a Korean American are true, it’s further evidence the NFL’s actual hiring practices are still riddled with discrimination,” said the group in a statement.

The NFL has come under increasing pressure to diversify its coaching ranks. While the majority of players are Black, the overwhelming majority of coaches are white. Chung, though, does not directly blame the league for his experiences.

“I’m not sitting here bashing the league at all, because there are great mentors and there are great coaches that embrace the difference,” Chung said. “It’s just when the Asians don’t fit the narrative, that’s where my stomach churns a little bit.”