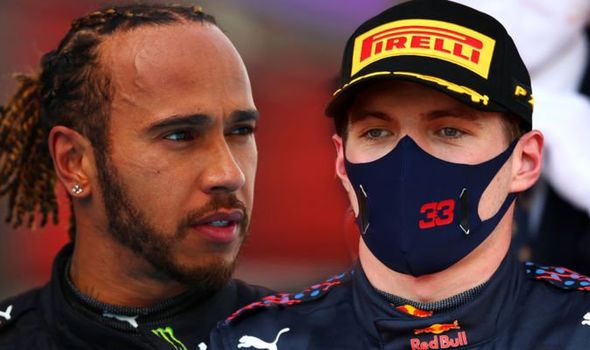 Lewis Hamilton has refused to get involved in a ‘childish war of words’ with Max Verstappen, after the Red Bull driver secured victory at the Monaco Grand Prix.

Verstappen now leads the driver’s standings for the first time in his Formula One career on Sunday after inheriting pole position in the principality, with his closest title rival Hamilton having a torrid weekend for Mercedes.

Hamilton had a 14-point lead coming into the weekend, but after finishing seventh, dropped to second in the championship, with Mercedes taking a huge hit in the team’s standings too, as Valtteri Bottas was forced to retire from second place mid-race.

With Verstappen’s team-mate Sergio Perez finishing fourth, Red Bull now lead the way for both the driver’s and the constructor’s titles respectively.

In the build up to the weekend, the games had begun in the press conference, with Hamilton claiming Verstappen had ‘a lot to prove’ in Formula One, something the Dutchman dismissed.

Red Bull team principal Christian Horner threw his hat into the ring, and suggested perhaps his driver’s performance was starting to rattle his main title rival.

However with the blow to Mercedes, Verstappen said he felt perhaps the point had been proven in Monaco.

“First of all actions speak louder than words, I think that’s a good lesson after this weekend,” said the Red Bull driver.

“You have to talk on track, that’s what I like.

“We as a team so far have made the smallest mistakes, and that’s why we are ahead, so I hope we can keep that going for the rest of the season.”

Responding to his rival, Hamilton said smiling: “I am not playing mind games. It is interesting what Christian [Horner] comes out with but I couldn’t care less. They did a great job this weekend and that’s that.

“We’ve had some good races also. There are 18 races to go. I’m not going to [say more]. It’s childish in the end when you start getting into a war of words.”

Verstappen now has a four-point cushion to Hamilton in the standings, with Lando Norris in the McLaren now leapfrogging Bottas for third place.

“It was not a great weekend but I don’t feel like I am dwelling on it,” added Hamilton. “There is a lot we could have done better in terms of our preparation.

“We had some good conversations through the weekend but it is not good enough from all of us and we don’t take it lightly.

“But there is no point getting depressed about it. We have to look at the data and find out why we are in this position.

“Naturally, we all want answers within the team and I know everyone will be working flat-out so this weekend doesn’t happen again.

“We have shown time and time again that we can bounce back so I am not too emotional at present.”