How do I make aubergines more appealing? 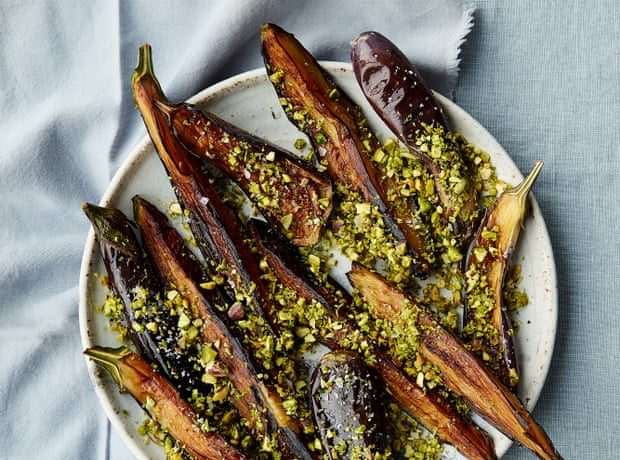 I’m finally rediscovering aubergine after being left scarred by 1970s abominations of moussakas. Any tips on making it not squeak when you eat it?
Katie, Highlands

“I was never a big aubergine fan,” sympathises Neil Campbell, head chef at Rovi in London. “The skin was always an issue for me: it’s bitter and astringent, but looks lush and shiny, and it tricked me every time.” While salvation can be found in the likes of Meera Sodha’s walnut-stuffed aubergines, Campbell finally saw the light when he started working for “the master of all aubergine dishes”, Yotam Ottolenghi. “I’m now fully converted.

While we can’t transport an Ottolenghi to Katie’s kitchen to oversee her recovery, frying is as good a place to start as any. “Maybe it’s because I’m Scottish, but I love deep-fried aubergine,” Campbell says. Once fried, he then bakes it parmigiana-style, a tactic also employed by Ben Tish, whose new cookbook, Sicilia: A Love Letter to the Food of Sicily, is out next month. For the parmigiana served at London’s Norma, where Tish is culinary director, aubergines are salted “to get the water out”, rinsed, then deep-fried in olive oil at 160C. “They come out beautiful and golden brown, then we sprinkle them with breadcrumbs and salt to add another texture and absorb any oil and juices that have come to the surface.” Tish then uses the fried aubergines in a parmigiana, or serves them as they are with salt, a drizzle of honey and mint. “Neither will give you squeaky results.”

Also low on the squeak scale is serdakh, an aubergine-and-tomato number from south Azerbaijan. “It’s just four ingredients, but it’s some kind of magic,” says Olia Hercules, chef and author of Summer Kitchens. She cooks two medium aubergines cut into “manageable wedges” in three tablespoons of butter or ghee (“clarified is best”) until softened and golden. “Take them out, then add more butter or ghee and six halved ripe tomatoes, and cook until they collapse.” Add 10 sliced garlic cloves, cook over a low heat until soft but not coloured, then return the aubergines to the pot with 200ml water, season and cook on a medium heat for 15-20 minutes longer. “The aubergines will by now be silky, saucy and delicious,” says Hercules, who eats them with rice, couscous or even just a hunk of bread.

Alternatively, get stuffed. And round aubergines are ideal for that treatment, Tish says. “Cut off and reserve the top and a small slice off the base [for stability], scoop out the insides, then prick the skins with a skewer to release the moisture and roast until it slightly blisters.” Tish then fills the aubergine shells with pork and veal ragù and pecorino, or with the fried reserved flesh mixed with ricotta, lemon, mint, capers and pine nuts. “Bake that, basting it in the oil regularly, until it all starts to bubble and the aubergine crisps up.”

In the dip department, Hercules says it’s hard to better Ukrainian aubergine caviar at a barbecue. As with baba ganoush, you bake pricked aubergines whole until they collapse and go creamy inside, then scoop out the softened flesh and mix with chopped roast or fresh tomatoes, diced red onion and/or garlic, a slick of unrefined sunflower oil, a bit of lemon, plenty of sea salt and lots of fresh herbs – “dill, coriander, basil and tarragon all work amazingly.” Spread that on toast, Katie, and consider your aubergine aversion cured.