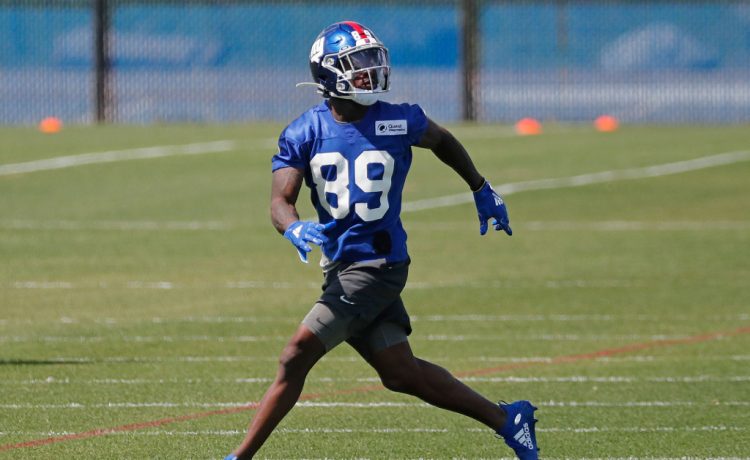 The Giants this week opened up Phase 3 of their offseason workout program with the start of OTAs. Coaches can have the players on the field for daily 2-hour, non-contact practices. And, lest we forget, it all is strictly voluntary.

The only mandatory offseason work is the June 8-10 minicamp.

Teams are allowed a maximum of 10 OTAs, and this will resemble actual football far more closely than the recently completed rookie minicamp, which featured individual drills with just 22 participants. The Giants will be able to engage in seven-on-seven and 11-on-11 drills, and use offensive and defensive lines, something they did not do at the rookie camp.

Here are five things the Giants would like to get out of their OTAs.

There has been so much hype about how the Giants upgraded the offensive firepower on their roster — with the free-agent signing of Kenny Golladay and tight end Kyle Rudolph, and the selection of Kadarius Toney in the first round of the draft. Rudolph is rehabbing from foot surgery and is unavailable. Golladay worked out with his new teammates, including quarterback Daniel Jones, during early April throwing sessions in Phoenix, and this is the next step in the process. Toney was at the rookie camp but had not yet attended any OTA practice this week heading into Thursday’s session.

Shots of Daniel Jones circulating this offseason show a buff athlete. No one questions the Jones physique. Entering his third NFL season, Jones, who turns 24 on Thursday, already has the respect of his teammates, something he gained as a rookie. This is his second year in coordinator Jason Garrett’s offensive system, and he needs to show that he is in command, something he certainly was not at this time last year.

We have got to get a look at this defensive backfield. It certainly seems loaded, does it not? Nothing is getting revealed in late May, but it will be interesting to see how defensive coordinator Patrick Graham starts deploying his personnel. The Giants signed Adoree’ Jackson in free agency, and he figures to line up on the outside opposite James Bradberry — with Jabrill Peppers, Logan Ryan and Xavier McKinney as a three-pronged safety grouping. There is plenty more in the way of depth, and it will be fascinating to see what Graham has planned for Darnay Holmes (most likely a slot corner), Julian Love, Isaac Yiadom, Sam Beal and rookies Aaron Robinson and Rodarius Williams.

There was a determined effort to improve the speed on the roster, and this week is a good first look to see how much faster the Giants look on the field. The addition of John Ross, a bust as a Bengals first-round pick, provides the passing attack with a player who adds a sprinter’s threat — as long as he runs proper routes then holds onto the ball. Toney is known for his quickness and elusiveness, but he is also flat-out fast. Jackson at cornerback can run. There will not be much full-speed action, but when there are one-on-one receiver-defensive back drills, the need for speed will be front and center.

Running back Saquon Barkley is on schedule in his extensive rehabilitation following surgery in late October to repair the damage caused on Sept. 20 in Chicago, when he tore his right ACL and also suffered an injury to his right meniscus. The Giants expect he will be ready for the start of the regular season. Barkley will be on the field for the OTAs but will be watching, as he is not cleared to participate.

Two outside linebackers coming off serious injuries, Lorenzo Carter (ruptured Achilles tendon) and Oshane Ximines (shoulder), are hoping for full recoveries after missing so much time in 2020. Charting their progress this spring and on into the summer will provide a glimpse into how they might be utilized this season. The Giants took Azeez Ojulari in the second round of the draft and Elerson Smith in the fourth round, and both are outside linebackers with pass-rush potential. They also signed Ifeadi Odenigbo and Ryan Anderson in free agency, and have Cam Brown and Carter Coughlin entering their second years. Carter and Ximines need to prove they are healthy, as quickly as possible.