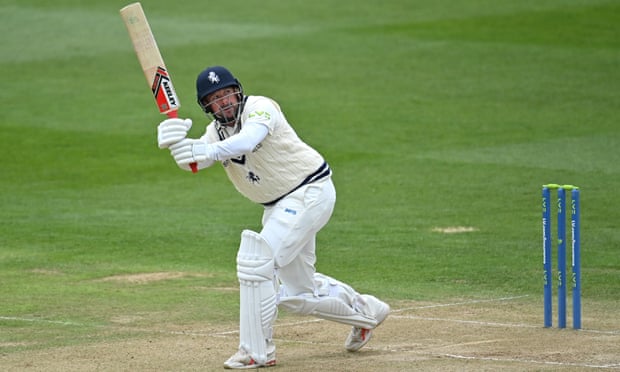 As with so much else in his life, fame came late in the day to Darren Stevens. The Kent all-rounder’s extraordinary innings of 190 against Glamorgan last Friday created a very modern sort of buzz, one that has really been possible only in recent years. For decades, an innings like Stevens’s would have existed largely in the imagination: a blur of numbers on a screen and two columns in the newspaper, rather than an actual lived memory. Now, via social media and the miracle of the YouTube livestream – hey, psst, stop what you’re doing and watch this – it can live in plain sight.

And what an innings it was: remarkable not so much for its technical excellence (he was dropped three times) but for its sheer, sleeves-up, bollocks-to-you audacity. Michael Neser, a 90mph Australian international seamer, is smashed over his head. Andrew Salter, a lovely classical off-spinner, has resigned himself to being hit for six before he even delivers the ball. At the other end, Miguel Cummins shares a ninth-wicket partnership of 166 in which his own contribution is one.

Often it is said of great cricketers that they could clear bars. Stevens, by contrast, leaves tabs unopened, emails unread, household chores unfinished. Almost 90,000 people logged on to watch his innings: comfortably more than have ever been present to watch him in the flesh. Indeed, he may well be the first star of the county livestream era: a status generated not just by his titanic feats with bat and ball, but by the curious folk following he appears to have attracted in his later years.

At which point – and with apologies to the man himself – it is customary to mention Stevens’s age, often in simpering and reverential terms, as if it were some debilitating condition for which he is terribly brave for playing through. He is 45, has taken almost 250 first-class wickets since turning 40, and has been a veteran for so long that even some of the early celebrations of his longevity now have a quaintly dated feel to them. This alone has seen him painted in some quarters as a sort of atavistic hero, a triumph of old-pro experience and honest graft, perhaps even a rejoinder of sorts to English cricket’s obsession with youth and novelty.

Clearly there is a certain generation of middle-aged men – which, statistically speaking, probably incorporates a considerable overlap with the Guardian’s county cricket audience – for whom Stevens is essentially Doing It For All Of Us, a precious vessel bearing the dreams of club trundlers, Sunday sloggers and armchair Arlotts up and down the country. In a way, he’s out there so you don’t have to be. Which is just as well, because it’s unseasonably cold and to be quite honest you were looking forward to a sit-down.

And so ever since he embarked on his extended Indian summer, Stevens has found himself an emblem of something larger. To some, Stevens-love is an indisputable badge of authenticity, a way of showing you get county cricket on some important, fundamental level. For all his pyrotechnics with the bat in short-form cricket, Stevens doesn’t have a Hundred contract, never played for England, and – for all the entreaties of a vocal minority who long to see him training his 74mph nibblers on David Warner at the Gabba on 8 December – never will.

To others, players like Stevens – and particularly Stevens the bowler – are the problem, the reason England consistently lose away from home. Collecting their contracts year after year, harvesting cheap April and May wickets by the bucketload, blocking the path for younger seamers, all while honing skills that in the game’s broader context are virtually useless.

This is, in effect, a struggle for the soul of English cricket, and it’s fair to say both sides have a few blind spots to them. Foremost of which is the fact that – whether through improvements in fitness and sports science or increased financial incentives – top sportsmen and women are just hanging on for longer these days. Tom Brady won the Super Bowl at 43. Phil Mickelson has just won a major title at 50. Rafa Nadal, Roger Federer and Serena Williams are still competing at the top level of tennis. Jimmy Anderson is 38 and about to play in his ninth Ashes. Maybe it’s time we started loosening our expectations of how far a well-conditioned body – and a well-conditioned mind – can take you these days.

For all this, Stevens remains a genuine outlier: a late developer who never really thought he would make it until his late-20s, who never saw himself as a frontline bowler until his mid-30s, who has spent virtually his entire career clinging to this world, constantly expecting to be spat out. Perhaps this is why he seems so unencumbered by pressure: bowling was a Plan B to his batting, which became the Plan B to his bowling, and if everything failed there was still a pint and a new plan waiting for him at stumps.

And really, this is the other point to make here: Stevens is a one-off. Do you see a stampede of 40-something seamers clogging up county cricket? Do you see a thwarted generation of young all-rounders equally capable of blitzing 190 in three hours and averaging 20 with the ball? The great illusion of Stevens’s career is that anyone could do what he did. Instead, as he enjoys his bloom of late-career celebrity, we can finally see him as he is: not the problem or the solution, but simply a freakish champion cricketer, one representative of very little but his own enduring excellence.